Gene Goss Is Kind Of A Funny Dude

"We have two fine candidates. I don't know either one of them." - Gene Goss

Mod: A few interesting things happened at last night's City Council meeting. I am not going to get into very much of that today because I have to get up early tomorrow, and it is almost 1 AM as I am typing this. If I don't get my five hours of shut eye I'll be a little less than functional at work tomorrow. Which is probably OK. I do work in the music business. It's not like I'll be operating on anyone's brain or anything.

The one thing I would like to share with you today is what happened when the City Council selected a new member for the Community Services Commission. Most of the City Council supported the obviously more qualified of the two people under consideration. Gene Goss did not, and ended up casting the only vote for the other candidate. We're going to try and explain that.

Here is how the winning candidate for that Community Services Commission seat, Debbie Sheridan, presented herself at last nights's City Council meeting.

Good evening Councilmembers.  Congratulations Mayor Harabedian on the birth of your son.  Thank you for giving me a second opportunity to speak about my  qualifications for Community Services Commissioner.

At the July 8 meeting, I let you know about my 27 year involvement with Sierra Madre Little League, Pony and Colt League, girls’ softball, Manager of the Dapper Diner, AYSO, LaSalle Parents Board, Athletic Boosters, and writing articles for the Sierra Madre News and Sierra Madre Weekly, as well as serving as liaison to the Pasadena Star News sports editor.  I mentioned my four year involvement in serving on the General Plan Update Steering Committee.  I coordinated the Outreach Team, which helped the paid consultants with many tasks and provided the publicity for our three Town Hall Forums.  My subcommittee developed and administered the community wide survey.  Tonight I’d like to mention the other local activities I’ve participated in, as well as adding detail to my application for this position.

I have an MBA, with a concentration in Marketing.  I was an Assistant Professor and taught Marketing, Market Research, Accounting, Income Tax, Business Management, and Ethics.  As an IRS Agent, I audited the tax returns, legal documents and financial statements of small businesses.  I was promoted to the Review Staff, and reviewed other Agents’ work for correct administration of the tax law and technical correctness.

I’ve marched in the Fourth of July parade several times, my favorite being with the Friends of the Arts.  I was an easel, and was painted on down the parade route.  I also marched for the dog park, which shortly afterward became a reality.  I have served on two committees that are part of the Community Services Commission.  As part of the SM3TV committee, Illona Volkman and I reviewed the SM3TV contract, and reported our findings to the committee.  I was on the Art Review Board for four years, and am currently a member of the Friends of the Arts.  I have helped with the Friends of the Library Wine Tasting, Concert in the Park, making and selling confetti eggs on the Fourth of July.

I played softball in our adult softball league.  We were the Madres and Padres.  About ten years ago, I formed a soccer team, Haute Pink, to compete against much younger women.  It took us a year before we scored a goal, but not only is the team still going strong, an article about us was on page 1 of the California section of the Los Angeles Times.  I have been profiled as Volunteer of the Week in The Mountain View News.

My experience and involvement gives me the expertise to assess contracts and budgets, write articles for the local newspapers, develop surveys and assess the needs of all members of the community.  I’ve worked with City staff as Deputy City Clerk, and on committees, and have learned about the organizational structure of the City.

I’d like to mention that I’ve had the opportunity to live elsewhere and have benefited from the exposure of living in other cities, other states, and other countries.

Once again, thank you for this opportunity.

Here is how the candidate that Gene Goss voted for represented himself. Keep in mind that Mr. Loera did not show up at last night's City Council meeting, nor did anyone but Gene speak on his behalf. Instead all we have is the following application. 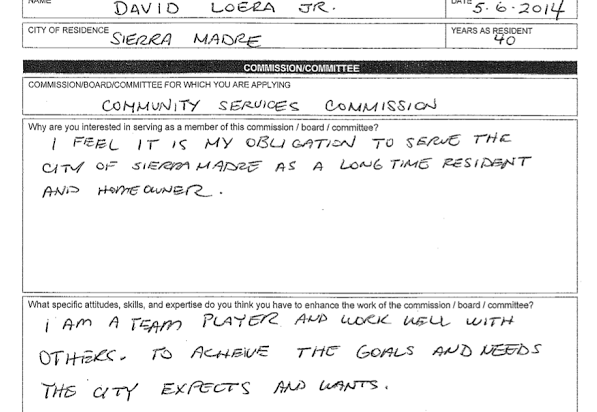 That is it. About as minimal an effort as you can possibly make. You can only wonder why he even bothered to try.

So why did Goss vote for the candidate who not only has done very little, but also showed that he didn't feel he needed to work very hard to get the gig? Here is how one poster put it last night.

That commission is comprised of intelligent and highly independent people who do not kowtow to City Hall. Instead they do what they think is right for the community. For the people Gene Goss represents that is a bad thing. They want people who will do what the City Manager tells them to do.

Works for me. The only thing I would add is to follow the money. City Hall wants to monetize everything it possibly can. Those belonging to the Community Services Commission would rather do what is right for the people of Sierra Madre. And Goss, as something of a L.A. County political machine kind of a guy, only cares about keeping the unions happy.

Speaking of which, we'll get into that somewhat inaccurate UUT presentation city staff put on in our next post. But I would like to leave you with this reader comment, which was posted here late last evening.

I'm completely irate about the way Gene Goss addressed Rachelle and Denise about their remarks about the future budget and the way it can be changed without employee reduction. He clearly has an issue with women smarter than he is. Good for Rachelle for putting him in his place - very politely. I'm also worried that Capoccia has mentioned such drastic cuts as closing the library. If you want to see a public uprising, just try that one on for size.

I think Delmar and Arizmendi are on the right track about reorganization of departments, and the fact that the projection of the deficit may not be as large as predicted. Combine the two and problem solved.

You really do have to start wondering what troubles the guy. That and who exactly is feeding him all of the nonsense he so obviously believes.

But that is a topic for tomorrow. At least for me.