Mod: This was originally posted at the bottom of the previous article, but since the first three comments made so much sense I thought I would move it up here and make this into a separate post. It certainly is a topic that has been on the minds of a lot of people over the last year or so.

This article, written by Zen Vuong of the Star News, brings up a few points that I think are pretty important. The topics being yellow water, and the extraordinary amount the city has to flush out of the pipes through hydrants to get this water to run clear. Something that many here believe is extremely wasteful. Here are the first few paragraphs. If you want to read the entire article, the link is here.

Bruce Inman, director of public works, said Sierra Madre has always flushed out its water system because of health department requirements. But it increased the hydrant flushing frequency in October because adulterated water was coming out of faucets and taps throughout the city. Workers are trying to clear loose rust and particles from pipes by forcing large amounts of water through more often.

Sierra Madre owns a water truck that could hold about 3,000 gallons of water, but it is infrequently used during hydrant flushing, Inman said. The city would expend more money saving the water than it would if it let the liquid run its course into gutters and groundwater sources.

“The difficulty you still have is the amount of time that is spent driving the truck back and forth between fire hydrants,” Inman said. “We do not have adequate staff to devote to the hydrant flushing process.”

Even as city employees are running water through hydrants, the council approved mandatory 30 percent water conservation on July 8.

While much of the article is a discussion with Bruce Inman, there is also a short interview with Fay Angus about colored water and how that has affected her water usage.

Here are those comments: 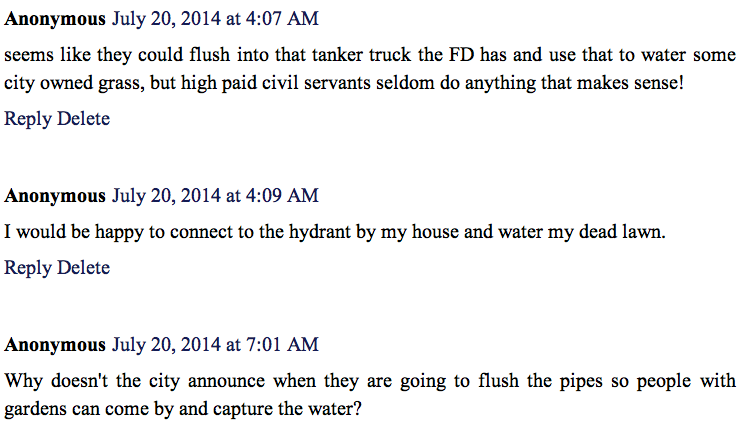 http://sierramadretattler.blogspot.com
Posted by The Moderator at 7:25 AM