Pasadena Unified School District (PUSD) superintendent Jon Gundry has just been tapped as the new superintendent for the Santa Clara County Office of Education (SCCOE), despite PUSD’s failing marks under his tenure from 2011 to 2014. His base salary will rise from $240,000 to $295,000 with the promotion effective August 1.

In 2013, the PUSD received a 751 score on California’s Academic Performance Index (API), down from 762 in 2012. API scores range from 200 to 1000, with 800 the targeted goal. Additionally PUSD received an “F” grade in a report card issued by State Sen. Carol Liu, which assessed the school’s performance in serving its low-income and minority students. Their overall grade of “D” was not much better.

When discussing the declining API scores, Gundry cited a decrease in district revenue as responsible for the poor scores.

Recently published compensation data for employees in California’s K-12 schools by TransparentCalifornia.com sheds light on this claim. The data reveals that Gundry earned substantially more than other superintendents in the area, despite overseeing a district with significantly lower performance marks. Further, the median compensation of the District’s teachers was rising, not falling, and remained consistent with the level of similar districts within Los Angeles County.

The payroll data reported by most schools does not distinguish between full and part-time employees. As such, this analysis considers teachers that received at least $25,000 in salary as full-time. The median compensation for a full-time teacher in PUSD in 2013 was $90,092, an approximately 2.7% increase from the 2012 median compensation of $87,226. At the same time he was bemoaning district funding levels, Gundry also saw a similar percentage increase in his compensation, which rose from $291,717 in 2012 to $301,081 in 2013.

Other districts though, produced greater student achievement with lower levels of teacher and administrator compensation: 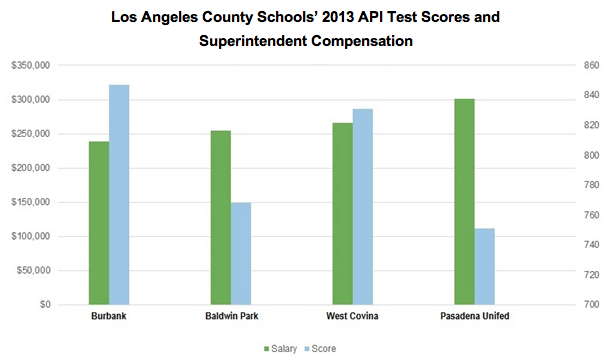 Liu’s report card cited nearby Baldwin Park Unified as an example for PUSD to look to and with good reason. In addition to earning a “B” grade from Liu, the district received an API score of 768 for 2013. The median compensation for a full-time teacher in the district was $88,861 in 2013. The district’s superintendent, Mark Skvarna, received $254,990 in 2013, which was actually a modest decrease from his 2012 compensation.

So why is the highly compensated superintendent of a failing school district receiving a promotion and pay increase?

Understanding the actions of a school board requires looking at the system itself. Beneath the seemingly straightforward goal of educating children lie competing political interests. Groups including the powerful teachers union, administrators and the school board are all competing for political power, money and control. Unfortunately it’s only rarely that the public education system rewards these groups for their ability to educate children.

School administrators then are often selected for their political skills and ability to manage or placate competing interests, as much as or more than for their education skills.

Based on Gundry’s promotion to become SCCOE’s new superintendent, it’s obvious his political skills are well-tuned. California’s students deserve a system that promotes education-based achievements, not political ones.