Sacramento Is Cracking Down On Your Water Use

I guess it was inevitable. When even the all knowing and mighty statesmen of Sacramento have woken up to the fact that the State of California and its 39 million thirsty residents could run out of water, and within the next two years no less, then you know it really must be serious.

Despite all of the nonsense we've heard from visiting developer suits and their legal hirelings at our two most recent City Council meetings (link), it really is a very dangerous situation. And also one more instance where the forces of nature have somehow magically intervened to prevent Sierra Madre from being chopped up into yet another unhappy and overdeveloped example of California Generica.

But not without a cost. Here is an ABC News article that discusses California running out of water in as little as two years.


FEDERAL METEOROLOGIST: CALIFORNIA 2 YEARS AWAY FROM RUNNING OUT OF WATER (link): A U.S. Department of Agriculture meteorologist believes California is only two years away from completely running out of water.

In a recent interview with 24/7 Wall St., federal meteorologist Brad Rippey said the drought has dragged on for three-and-a-half years in many parts of the country and is possibly worst in California.

"Reservoirs which are generally fed by the Sierra Nevada's and the southern Cascades [are] where we see the real problems," Rippey told 24/7 Wall St., "At [the current] usage rate, California has less than two years of water remaining."

So the not so quickly reacting solons of Sacramento, who have finally taken things such as the above to heart, have now cooked up something completely the opposite of what Sierra Madre's City Council did with its Phase III water use restrictions the other week. Opposite in that the mavens up north kept the fines, but did absolutely nothing about limiting any new water uses for development.

Which is something that the building and real estate lobbies in Sacramento, folks who lavish these mendacious malefactors with millions of dollars in campaign donations in exchange for their legislative favor, would never tolerate.

Here is a portion of an article recently published by The New York Times (link):

California Approves Forceful Steps Amid Drought - With rainfall this year at historically low levels and reservoirs quickly dwindling, California officials on Tuesday approved the most drastic measures yet to reduce water consumption during the state’s increasingly serious drought, including fines of up to $500 per day under some circumstances for watering a garden, washing a car or hosing down a sidewalk.

The new measures come in response to an apathetic public that has ignored repeated pleas to save water since Gov. Jerry Brown declared a statewide drought emergency in January. Though the governor asked all Californians to reduce their water consumption by 20 percent, water use actually increased by 1 percent statewide in May, according to a state survey released Tuesday.

Californians are turning in their neighbors. “People really don’t understand the gravity of the drought, particularly in urban California, where people are hundreds of miles from their water source,” said Felicia Marcus, chairwoman of the State Water Resources Control Board, which voted on Tuesday to impose the new regulations. They are expected to take effect around Aug. 1.

It is pretty much a bash the little guy attempt at a solution. And, as is the practice in Sacramento, they did what they enjoy doing best, taking more money from folks like you and I.

And so, on Tuesday evening, down there at the Slough of Despond (which some still insist on calling Council Chambers), Sacramento's water fine happy mandate will be weighed by the City Council. It is Item #2 on the agenda, and it looks something like this: 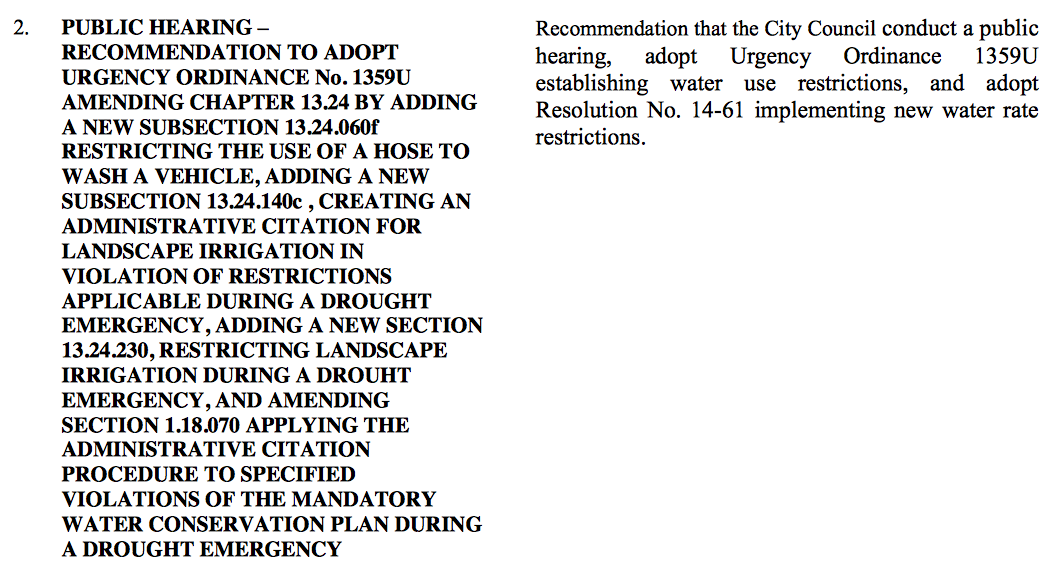 The Staff Report for this momentous little number has a lot of information that I don't think needs to be regurgitated here. If you wish to do so you can read the whole thing by clicking here and moving your eyeballs from left to right. But here is the passage that details what fines you could be paying, and soon:

Here is what you, the offending townie, will be fined for should you fail to get with it:

And here is where those who will be enforcing this state mandated crackdown on your suspect water habits are identified:

No news yet if City Hill will be sponsoring a "Turn In Your Neighbor" promotion, but if there is a revenue stream attached to it I am certain that they will.

Perhaps some state funding is available?

The Looney Views News Airbrushes Itself Out of the Picture

The Looney, which caused quite a bit of chaos in town last week when somehow the City's legal notice for the scheduled Public Hearing on the building moratorium mysteriously didn't make it into the paper, printed the following Saturday: 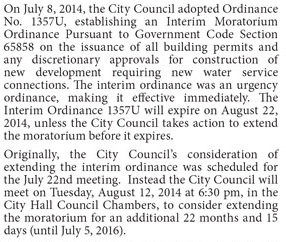 It is funny how the paper's starring role in all of this somehow got left out. Well, OK, maybe not that funny.

http://sierramadretattler.blogspot
Posted by The Moderator at 5:00 AM