The Public Notice for the remaining City Council business involved in extending Sierra Madre's building moratorium through July of 2016 has now finally been published by the Mountain Views News.

The paper's publisher, who somehow spaced out on her responsibilities (if that's what it was) here a few weeks ago, failed to honor a legally mandated requirement to publish this notice. This is what caused the City Council's deliberations to be bumped out of last Tuesday's agenda and into next month.

Because of Susan's error each of the five City Councilmembers will now have to drag themselves back from their summer vacations to meet in a special session on August 12th. I am certain this has sent all of them deeply into a state of beatific ecstatic peace beyond all known (and as yet unknown) past and present beliefs.

While Mountain Views News publisher Harriet Susan Poole Carter Henderson has steadfastly refused to accept any responsibility for what happened, the City of Sierra Madre did acknowledge the cause for this building moratorium extension discussion being pushed into August. The reason being to do otherwise would have been, thanks to Susan's dottiness, a violation of California law. Here is how this was communicated in a City Hall news release earlier this month (link):

City Council Consideration to Extend the Interim Moratorium
On July 8, 2014, the City Council adopted Ordinance No. 1357U, establishing an Interim Moratorium Ordinance Pursuant to Government Code Section 65858 on the issuance of all building permits and any discretionary approvals for construction of new development requiring new water service connections. The interim ordinance was an urgency ordinance, making it effective immediately. The Interim Ordinance 1357U will expire on August 22, 2014, unless the City Council takes action to extend the moratorium before it expires.

Sierra Madre resident Judy Gold sent an e-mail to City Manager Elaine Aguilar asking her about how our adjudicated weekly newspaper's publisher was going the make good on this failure. The bonus revelation that came out of this exchange being The Mountain Views News is giving the City two freebie runs on this Public Notice. Both this past weekend and next.

Whether this is enough to compensate the taxpayers of Sierra Madre for the expense of having to pay for an otherwise unnecessary "special meeting" (and aren't they all special?) is not known as of this typing.

Here is that e-mail exchange:

This is an enquiry email via City of Sierra Madre from: J. Gold  xxxxxx@xxxxx.com;
Name: J. Gold
Subject: Publication
Message: Last night you mentioned the building moratorium extension notice would be published twice. Why is this notice being published twice? How much does it cost us to publish? And is Ms. Henderson paying for this because of her mistake?

From: Elaine Aguilar
Date: July 24, 2014 at 11:53:00 AM PDT
To: "J. Gold"
Subject: RE: City of Sierra Madre: Publication
Hello Mr. Gold (sic):
The notice is only being published twice to provide as much notice as possible.  The City is not being billed for either the first or the second printing of the notice in the newspaper.  The printing of these two notices is at no cost to the city. Please let me know if I can be of any further assistance.
Thank you, Elaine

So there you go. The Mountain Views News is printing the Building Moratorium Public Notice two weekends in a row, and doing it for free. Apparently this is her way of making up for that rather badly timed and unfortunate error.

While Ms. Henderson is loathe to admit any guilt to the general public, she is hardly as evasive when it comes to protecting her relationship with the source of much of her income.

Is City Hall attempting to restrict your use of the City of Sierra Madre website?

Let's say you are reading the City Manager's Report on the CoSM website, and see something of interest that you would like to forward to a friend. The best way to do that would be to make a cut and paste copy and send it off by e-mail. Unfortunately, and for reasons that are unknown at this time, you are now being blocked from doing this by the City.

Here is a screen shot of this new and unfortunate restriction in action: 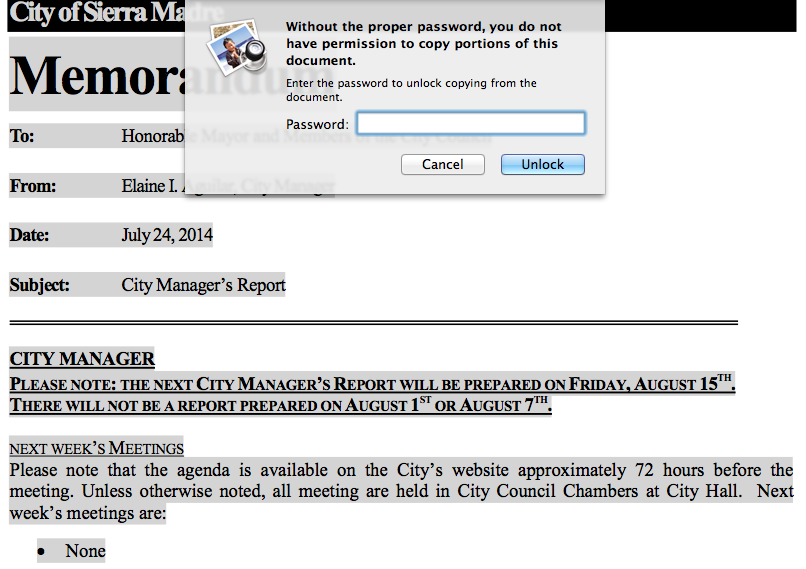 When the current City of Sierra Madre website was brought on-line, so very much was made about how it would improve city government transparency in this town.

It is therefore sad to see that City Hall has decided to take so unfortunate a step backwards.