Tuesday evening will be one of those rare City Council meetings where an important decision has got to be made, and there really is no way for any City Councilmembers to escape. Ostensibly about water use restrictions, what is also at stake here is the issue of moving forward on three unwanted McMansion developments in town. This during the worst drought in all of recorded California history.

Here are several of the less sanguine things to look for tomorrow evening:

1) It will take 4 out of the 5 City Council votes to put either a water or building moratorium into place. With Mayor Harabedian apparently adamantly opposed to anything but Phase III water restrictions, this means it would require all of the other Councilmembers to vote against him on this matter for either moratorium to survive. That is a tall order. My guess? Two other Councilmembers will join with the Mayor, but each will oppose a different moratorium opportunity. Done so that nobody but the Mayor will have voted in opposition to both.

However, should either of the moratorium choices actually get the 4 votes necessary, and this is possible, it will be a bruising political defeat for young Mr. Harabedian.

2) Every Councilmember currently seated at the dais ran for office as an avowed defender of slow growth and preservation in Sierra Madre. It is my belief that any of them voting against some kind of a meaningful moratorium on development (the two options that don't include fining residents), will have sold out on their campaign promises to the residents.

3a) Mayor Harabedian's Phase III "water conservation" push is a cynical political ploy and designed to function as a wedge issue. He is pushing it in order to derail public outrage over McMansion development, in particular what is going down at Mater Dolorosa. Focusing public attention on water use fines (and how much your neighbors might be using, of course) is intended to dissipate public outrage over City Hall enabled mass development during this state's worst ever drought driven environmental disaster.

3b) Phase III water fines for use beyond what the city deems appropriate is also a scam. After two water price hikes in less than five years, a combined nearly 100% rate increase, plus water quality deterioration to levels approaching that of failed Third World nations (you do know that the water consultant we hired specializes in Third World water borne diseases, right?), fining people is nothing less than resident abuse. Few living here will be able to achieve 30% water use reductions on top of those they've already implemented, which means the majority of people in town will be fined. Some more heavily than others. This will result in a cash windfall for the City, tantamount to a 3rd water rate increase.

It will also result in widespread public outrage over Phase III water fines, leading to its cancellation within months, and taking the water hookup restrictions along with it. The developers and their City Hall enablers would all win big. You would lose.

4) You need to follow the "Money Rule." If you want to figure out where the Mayor and City Hall are going with this, follow the money. They need development impact fees to fund the Cadillac pensions and health care plans this city gave away to its employees during the last few rounds of union negotiations. Phase III "water conservation" gives the city its best shot at getting safely past the public call for moratoriums on development due to current drought conditions. The Mayor, who is beholden to the POA and other unions for their support in 2012, must deliver for them. Otherwise that shining political future he wants so badly could take a serious hit.

It is earn or burn time for Johnny. That is how it works here in one party L.A. County.

Here is a rather restrained Staff Report from City Hall: 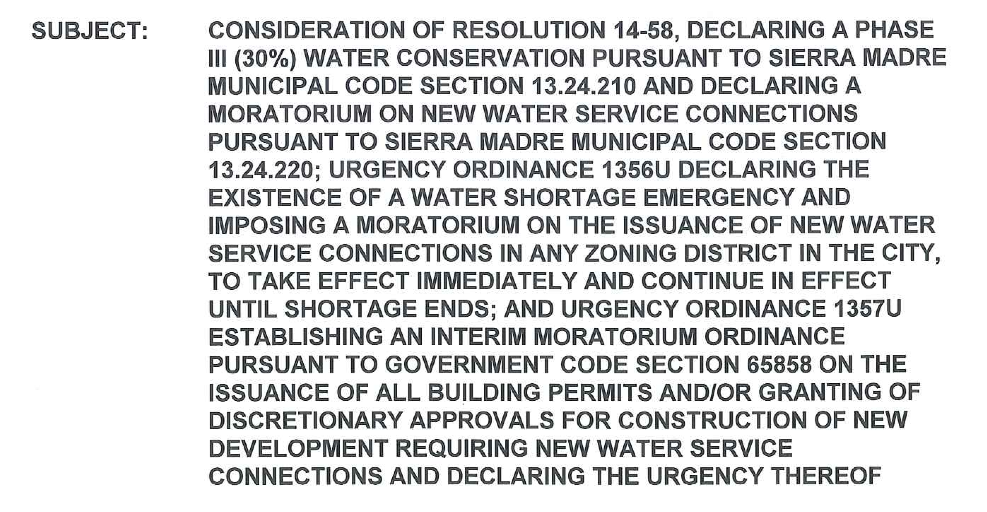 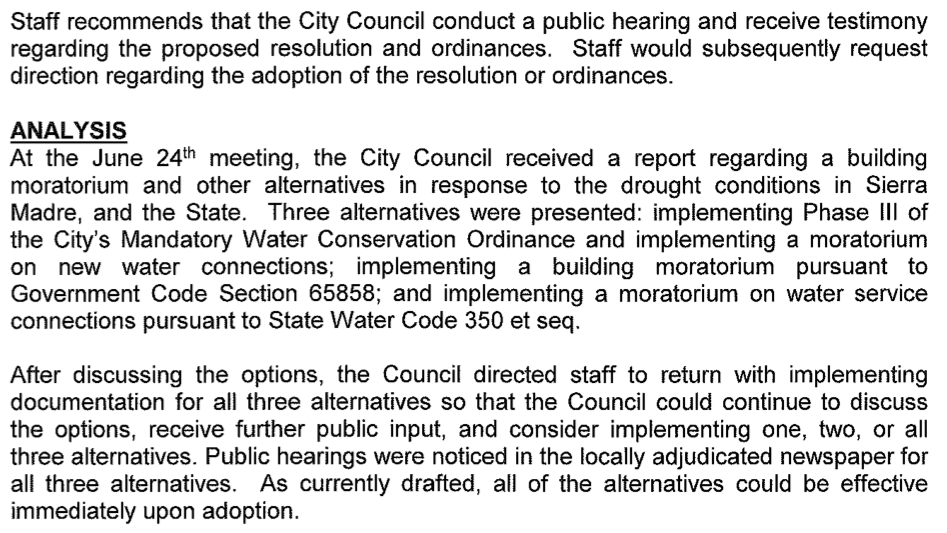 This really could be the most entertaining City Council meeting in years. You need to be there. Democracy only works when the people participate. Bring popcorn.