We have a saying here at The Tattler. If you want to know what is really going on downtown, follow the money. No matter what you hear, or who says it, and be it city staff, consultant or hired attorney, it is always about the money. That is all that matters there.

Specifically city employee salaries, benefits and health care plans. Even though they don't ever seem to want to say it, that is what is driving their engine these days. That and cooking up vaguely plausible tall tales designed to get you to pay all of their bills.

I was trading e-mails with Robert Fellner at TransparentCalifornia.com yesterday. I think I've told you about Robert. He is an analyst with an organization called NPRI, which is based out of Las Vegas, and he works with the budget numbers of hundreds of cities in both Nevada and California. There is a TransparentNevada.com as well, which Robert also helps run.

Bringing transparency to what has been going on in so many cities lately is no easy task, and that Robert has been able to expose the financial shenanigans of places like Sierra Madre is due to a lot of hard work on his part. It is quite an accomplishment, and we are the beneficiaries.

I explained to Robert what it is we are facing tonight at City Hall, and how the real driving force behind so much of what is going on here, city employee salaries, benefits and premium health care plans, never seems to see the light of day. It is the elephant in the room that never gets discussed. While you will hear endless talk about "services" and various "safety" efforts, how our money is actually being spent is never made clear.

About an hour later Robert shot me over the following two charts. These are both based on the most recent numbers the City of Sierra Madre has made available, which are from 2012. By law the numbers for 2013 do not have to be shared with anyone until this coming October. Which means TransparentCalifornia.com will not get to see them before Halloween. If then.

As attentive readers of this blog may recall, it almost took an act of Congress to pry the 2012 numbers from Sierra Madre City Hall.

This first chart deals with salaries in Sierra Madre. Both for we the privately employed townies and government City Hall employees. Check out the radical difference. 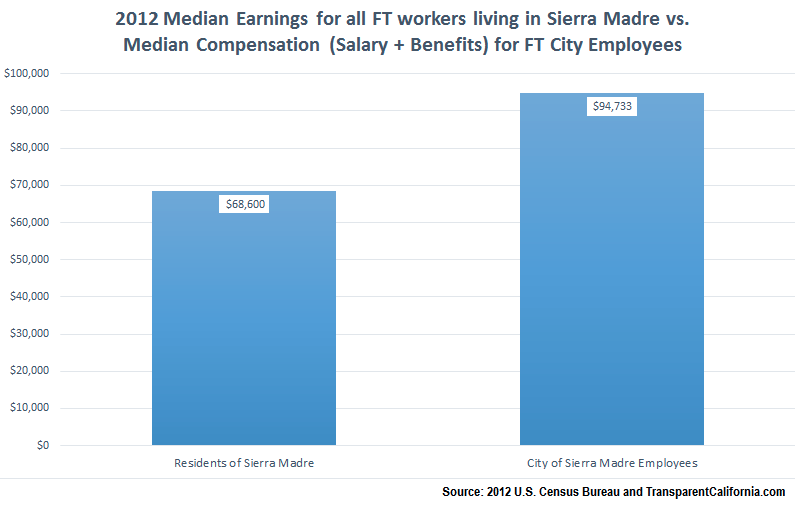 We have often heard from City Hall that they are somehow not compensated at levels appropriate to the importance of their service to this community. And as such they are prone to leave us and go work elsewhere, though very few ever seem to actually carry out that threat. Yet here we can see that they already make a lot more money than the average taxpaying Sierra Madrean.

So how do you justify that? And who exactly is working for whom these days?

The second chart deals with Sierra Madre's legendary City Hall health care plans. Which, and as everyone should know by now, are some of the most expensive in the state. As you will see below, they leave pretty much the rest of the country in the dust as well. 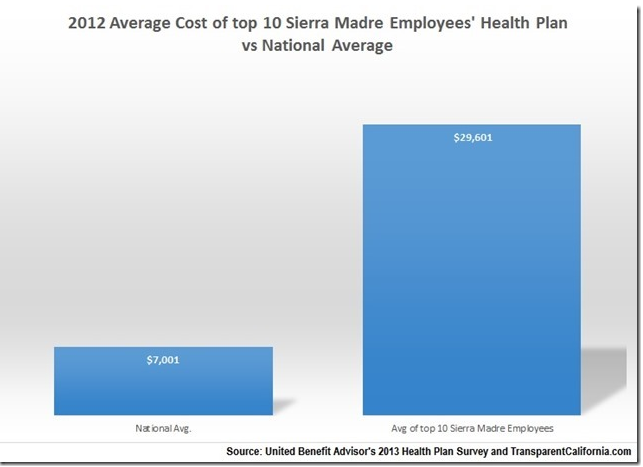 It is important to note that there would be a potential savings of $226,000 a year if these top 10 city government employees simply received an average costing health plan. That is a lot of money. And in a city where we have been forced to accept two water rate hikes in 5 years, nearly 100% in combined increases, it is an unconscionable amount. Phase III water fines would be equally outrageous.

Let me ask you this. Did you ever once hear the water rate consultant mention that our Water Superintendent here in Sierra Madre receives a $37,815 a year health care plan back earlier this year when the City Council was hyping our latest water rate increases? Or over $30,000 more per year than the national average?

You did not. The only place you've heard that is on this blog.

City Hall also tried to raise your utility taxes twice, only to be beaten back at the polls. Clearly showing just how far they are willing to go to feather their already quite comfortable nests.

So how does this relate to possible City Hall opposition to a building and/or water moratorium tonight? Brought about by the fact that Sierra Madre's traditional water supplies are gone, and the SGVMWD dreck that replaced it is only guaranteed for another two short years?

The answer is Development Impact Fees and additional taxable property. The three McMansion development efforts, Stonehouse, Mater Dolorosa and One Carter, would bring in huge amounts of money in both development impact fees and new property taxes to the city.

Come to think of it, as a religious organization Mater Dolorosa's property holdings have never been taxed. I wonder how Sacramento and Los Angeles County will view longstanding untaxed church property magically being transformed into a hot real estate investment commodity for neo-yuppies?

Now there is a topic that will require some looking into soon.

To boil it down to its purest essence, your Sierra Madre birthright is being sold out by this city to predatory developers in order to fund Cadillac pensions and platinum health care plans that are among the most expensive in the United States.

Is that a fate you believe is appropriate for Sierra Madre?