Mod: Somebody has finally broken our record. Back in March of 2014 The Tattler shared with a stunned city that at $37,815 per annum Sierra Madre had at that moment the single highest employee health care plan in California. This at a time when the city was screaming poverty and asking residents to vote themselves a big utility tax increase. The article was called "Can Employee Health Care Costs Be A Reason Why Utility User Taxes In Sierra Madre Are Highest In The State?" and can be linked to here. This plan and many others were slashed a few months later by our current City Council. However, it was proof of financial insanity like this that contributed to the defeat of Measure UUT in April of 2014. Today Robert Fellner reveals that somebody has now broken our record. And wouldn't you know, it's a water district.

Southern California Water District Paid $42,942 For A Single Employee's Health Insurance Plan: Despite the warning from the Government Accountability Office (GAO) of the impending burden to state and local governments from rising healthcare costs, some California governments are purchasing wildly exorbitant health insurance for their employees, at taxpayers’ expense.

Last year the Water Replenishment District of Southern California (WRD) paid $42,942 for a single employee's health insurance plan. Nearly half of the District’s full-time employees received a plan that cost at least $30,000 apiece.

In 2011, the WRD had four employees receiving plans that cost at least $30,000. By 2014, that number increased three-fold, demonstrating the $42,942 plan is not a remote outlier, but part of an agency-wide practice of vastly overpaying for health insurance. 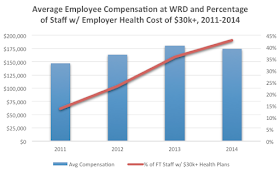 Surprisingly, WRD employees are also part of the coveted “3% @ 60” pension plan – which calculates the pension amount by multiplying the number of years worked by 3 percent, and then multiplying that number by the employee’s highest salary.

Typically, plans with the generous 3% multiplier are reserved for police and fire employees. In fact, the 3% plan is so expensive that the Pension Reform Act of 2013 eliminated it completely for new hires. New employees at the WRD would be under the reduced, but sustainable, “2% @ 62” formula.

The total compensation package for WRD employees is quite generous as well; full-time WRD employees received an average $180,636 in 2013.

As the data available on TransparentCalifornia.com is making clearer, it is in the often-overlooked smaller, local government agencies where the most dramatic levels of excessive public compensation can occur.

Public agencies overpaying on insurance premiums goes well beyond the tiny WRD. Transparent California previously reported on the widespread $20k+ health plans in Corte Madera and the Contra Costa Community College District, as well as the $30k+ plans found in the cities of Beverly Hills and Sierra Madre.

Pew Research confirms that the problem is nationwide – over the past 25 years, state and local government spending on health insurance increased 447% in inflation-adjusted dollars; and is projected to increase even faster going forward.

Even compared to nearby public employers – the Los Angeles County Sanitation Districts and the Metropolitan Water District of Southern California – who also dramatically overpay for insurance, the WRD’s profligacy is unmatched.

Unsurprisingly and consistent with the broader, nationwide data, California governments pay significantly more for health insurance than the average private sector employer. Local public agencies pay substantially more than the State of California, with the WRD paying nearly 2.5 times that of what the State pays, and over four times what the average national private sector employer pays.

To make matters worse, the forthcoming 'Cadillac tax' provision of the Affordable Care Act will significantly impact government employers and their propensity to purchase Cadillac-style plans. Beginning in 2018, employers must pay a 40 percent tax on the excess of plans that cost more than $10,200 for single coverage and $27,500 for family coverage.

For example, the WRD will have to pay an additional $41,000 a year in penalty taxes for just the 12 employees with health care plans over the cap at their current rates. Virtually the entire full-time staff – over 1,400 employees – at the Metropolitan Water District of Southern California receives health plans that cost more than $10,200 a year; if any of those plans are for single coverage only, they would be hit by the tax too.

Given the recent, and projected, double digit increases in health insurance premiums, merely holding costs to the present level by 2018 would be a remarkable feat.

Granted, the increasing cost of healthcare is much more complex than merely being the result of government wastefulness. A comprehensive solution would require an entire rethinking of how healthcare should be provided. Still, having a consumer as big as government routinely overpay for a product certainly contributes to its rising cost.

As taxpayers are struggling to pay their own health insurance premiums, government should be doing all it can to rein in costs as much as possible. As bad as the healthcare situation is at the moment, there is simply no justification for a government agency to consistently pay over $30,000 a year for their employees’ health insurance.

Mod: We have all seen the shocking pictures of drought scenes from throughout California. Now we have our own. A friend had the opportunity to take a helicopter excursion over Sierra Madre recently to take some photos. Here's one of them. 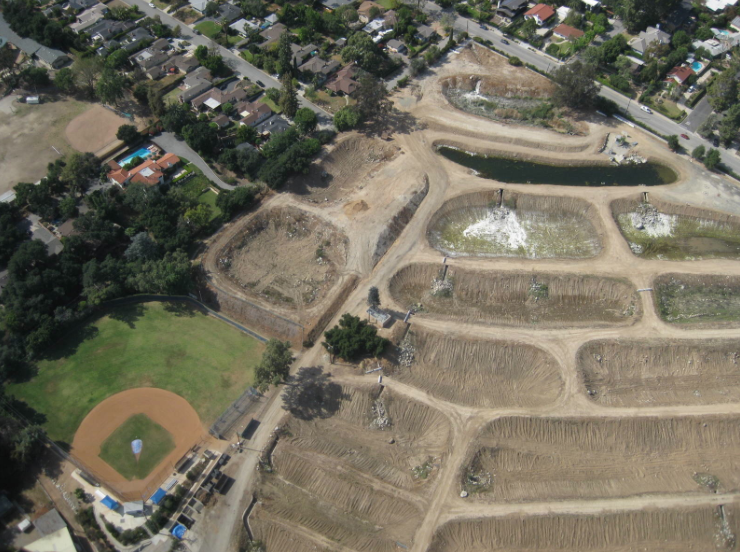