The Tattler Follows Up On Some Big Recent News Stories

There has been a lot happening lately, so much so that we've lost track of some of the news we had been following. I figured that today would probably be as good a time as any to follow up on a few stories. Though things have been moving forward rapidly, we do need to stay in touch.

Gene Goss and His Quite Quiet Contacts - During that recent City Council rhubarb over the Planning Commission's new R1 regulations on things such as building rather ominous second story additions to houses that then cast long dark shadows over their unhappy neighbors (something that in the querulous minds of a few minor irritants in town is synonymous with freedom), Gene Goss began to speak of the many anonymous people who had been contacting him about this issue. Folks who had chosen not to attend any City Council meetings and speak up personally about their concerns for fear they might end up in The Tattler. Or something.

Curious to find out exactly who these mystery men might be, and what really is on their troubled minds, The Tattler filed a California Public Records Act request to obtain copies of any e-mail records from (or to) Councilman Goss on this matter. The law recognizes such communications as official records of the peoples' business, and therefore this request is appropriate and civil.

Good Afternoon John - On April 30, 2015, the City of Sierra Madre received your Request for Public Records, pursuant to the California Public Records Act, Government Code Section 6250 et. seq. You have generally requested information regarding, “All city business e-mails sent to and from Councilman Goss,” pertaining to the new R1 regulations.

The California Public Records Act (CPRA), Government Code Section 6250 et. seq. provides that each agency upon a request for a copy of records shall within 10 days from receipt of the request, determine whether the request, in whole or in part, seeks copies of disclosable public records in the possession of the agency and shall promptly notify the person making the request of the determination and the reasons therefore.  As such we are required to provide disclosable copies of records. However, the CPRA does not require government agencies to create records or provide written answers to general questions.

The following is in response to your request pursuant to the California Public Records Act:

·Copies of emails are available for your review during regular business hours of 7:30 am to 5:30 pm on Monday to Thursday.  The total number of pages is 107.  The cost is 6 cents a page, if you would like copies.

Please let me know if I can be of any further assistance.

The good news here is that I have managed to scrape together the $6.42 it will take to have copies of those 107 pages made. That and I will also be down at City Hall Monday morning to pick them up. I will share anything of importance found there on this blog Tuesday morning.

Peter Dreier and the $15 Minimum Wage

Occidental College Professor Peter Dreier, a quaint though somewhat obstreperous and gnarled local relic of the 1960s New Left, has been working hard to make things difficult for local dry cleaner and pizza shop owners by advocating for a $15 minimum wage in Los Angeles County. Something that would likely put about 75% of Sierra Madre's downtown businesses into receivership should it ever happen.

That said, Professor Petey is reporting some success with his efforts. This screenshot is from a post he made yesterday on the Facebook site "Pasadena Politics" (link). 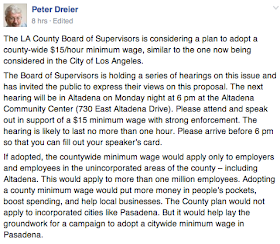 There go the liquor stores.

However, all is not perfect in the worker's paradise envisioned by our nutty professor. Tattler readers may recall that while Peter Dreier is fine with other folks shelling out $15 an hour for quotidian help, it isn't something he himself prefers to do.

As we revealed in one of our more widely read posts recently ("Occidental College Professor Peter Dreier, Noted $15 An Hour Minimum Wage Advocate, Outs Himself For Paying His Student Researchers $10 An Hour" - link), what is good for the goose isn't necessarily convenient for our favorite richly tenured Occidental College working class hero.

Noted Arcadia McMansion apologist gets his whoopie on

As you hopefully recall, the folks attempting to save the Arcadia Highlands from mansionization recently filed a lawsuit against that city in hopes of shutting down any further approvals for those awful things. Apparently Arcadia City Hall, in its greed driven and relentless appetite for more and more development impact fees, forgot about such niceties as the California Environmental Quality Act.

Money can do that to people.

However, all of that appears to be lost on Arcadia's Best, a Chamber of Commerce run blog there that faithlessly advocates for all that is trite and rotten about Arcadia. Here is how they got their George Orwell on this week and spun that lawsuit story like a top (link). Apparently in their minds defending the Arcadia Highlands from McMansionization is actually a threat to, get this, community preservation.

Lawsuit halts City projects, not history - Repercussions from a lawsuit that could impact the growth of Downtown Arcadia and the preservation of historical buildings in the Highlands while improving preservation elsewhere, a decision to shut off the city’s most prominent water fountain, a new ordinance dictating new rules about realtor For Sale signs, and discussion of the City’s upcoming $100 million-plus budget were just a few of the topics covered during more than five hours of Arcadia City Council meetings that could have been called Cinco de Mayor on Tuesday evening, May 5, 2015.

A class-action lawsuit filed by residents in the Highlands who are trying to stop construction of large homes has resulted in the City halting work on a citywide modification of residential and commercial zoning that was nearing completion after about two years of staff efforts and community input, as well as a long-sought survey of historical structures in the Highlands.

But the Council did vote 3-2 to approve moving forward on the historical survey in all other parts of the city, likely hiring a consultant already identified by City staff in the near future to conduct the survey to determine what buildings in town may be considered of historical significance, and then propose a Historical Preservation ordinance over the next six months or so, which could incorporate the Mills Act like many other cities that would allow property owners whose homes and buildings are considered historic to take advantage of tax breaks in exchange for preserving the historical elements of their homes and buildings.

Here is my other question. How did the author of this witless wackiness know what happened during the Arcadia City Council's closed session with their City Attorney? And how exactly can it be that he was then stupid enough to write about what he wasn't legally supposed to know in a blog that is partially funded by, you got it, Arcadia City Hall?

Unless, of course, it was later announced by the City Attorney. Who must be salivating over that big payday heading his way.

An interesting piece of newer news

I received the following e-mail yesterday from some good folks living close by the Rose Bowl in Pasadena:

John: Today a formal conflict of interest complaint was made to the FPPC by a member of a neighborhood association in the Rose Bowl area. The main issues relate to free tickets, the city council members votes and the Rose Bowl. The document is attached. If you would like more information, please email me.

I love it when people send me stuff like this. Here is how this awesome complaint reads: 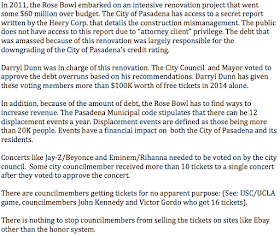 The following is a few examples of what the dedicated defenders of the public weal in Pasadena received in tickets, along with their cash value. There are quite a few more shady characters involved, but these four winners should give you the picture.

Pretty outrageous. How this cannot be considered bribery is beyond me. But what inquiring minds really need to know is if these fallacious officials got to go backstage and meet the pop stars. And if so, what exactly happened?

If anyone has a picture of Beyonce sitting in the lap of Bill Bogaard (or vice versa), would they please be so kind as to send it my way?