John Capoccia Was Against The UUT Before He Was For It


Mayor John Capoccia might have a small forest's worth of Yes On UUT lawn signs sitting on his porch right now, but it was not always that way. In 2012, when a not so very well known John Capoccia first ran for City Council, he was proudly against any extension of the then 10% utility tax. It was how he differentiated himself from most of the other candidates. He wanted us to believe that he was the real tax fighter, and why not? There was a decidedly anti-tax sentiment that year, and John Capoccia successfully rode that wave all the way to a seat on Sierra Madre's City Council.

Once safely elected he proceeded to vote for every tax, rate and fee increase that came his way. Something that elevated Mr. Capoccia into that special Joe Mosca Class of Sierra Madre elected official. Those who promised one big thing when they ran for office, and did exactly the opposite once on the City Council. We'd say that makes him something of an equivocator, but since he is a politician that would be a redundancy.

So here is a Monday morning kind of thought. What if John Capoccia had not run as an Anti-UUT candidate in 2012? What if he had been honest about his true intentions and instead had advocated for the passing of that year's version of Measure UUT? Would it have gotten the votes it needed to pass?

Using today's John Capoccia rationale for passing Measure UUT, is he the problem that we'd been warned about? Is he the responsible party for today's municipal monetary miasma? The real nut? Has John met the enemy and it is ... him?

Using the investigative power of the Tattler Research Team, we have now been able to uncover actual 2011 e-mails from then candidate John Capoccia. Missives to supporters where he discussed his animosity to the UUT, and why. Needless to say the opinions expressed are very different from what Mayor Capoccia is telling us now. 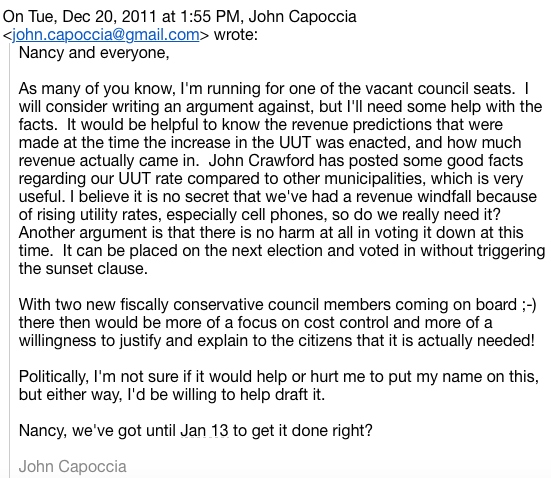 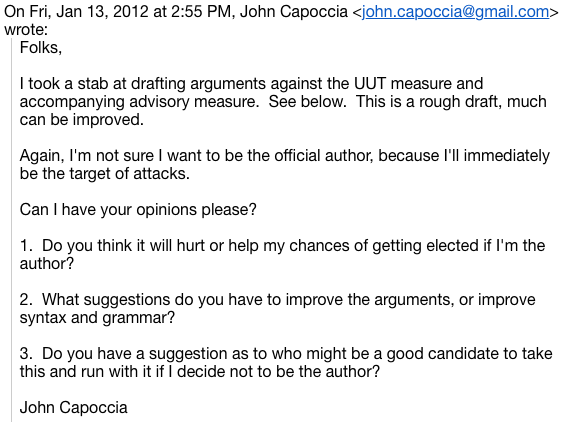 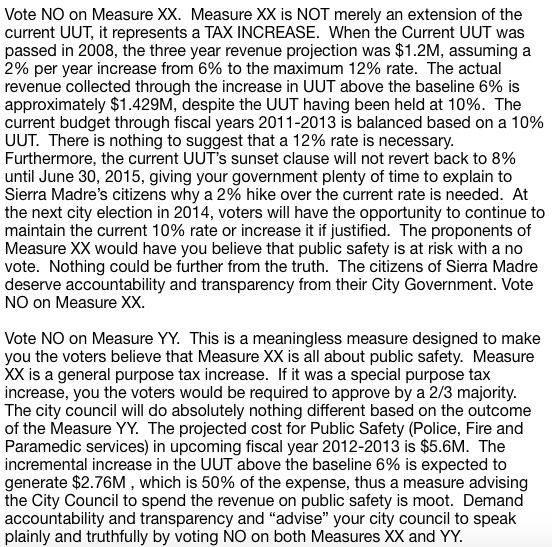 So let me ask you another question

If Capoccia was willing to run for office as an anti-UUT candidate in 2012, what are we to think of his efforts this year when he is running as a community preservationist? Is he taking a similar political advantage of the heartfelt need of many residents to preserve Sierra Madre in 2016?

Just like he did with his anti-utility tax posturing in 2012?

After all, John Capoccia flipped on an extremely important election issue four years ago. What is to prevent him from doing that again?


sierramadretattler.blogspot.com
Posted by The Moderator at 4:00 AM