"What Made Me Love Sierra Madre? Having two police forces when all the other cities only have one." - reader comment 6:06 AM

Should Sierra Madre pay as much as $1.2 million additional dollars to keep the currently employee retention challenged SMPD? It is a question that most likely won't be asked at Tuesday evening's City Council meeting, or at least in this way. That doesn't mean it won't be asked here. We really do like to bring the elephant out into the open at The Tattler. And this has always been a town with its fair share of elephants.

But yes, at approximately $100,000 a month, and for perhaps as long as an entire year (depending on the as yet undetermined amount of time it will take the Sierra Madre Police Department to rebuild its depleted ranks up to a fighting trim), it could conceivably cost the City of Sierra Madre and its taxpayers that much money to temporarily hire the LA County Sheriff's Department to patrol the streets at night.

Here is how that costly news is shared with we the people in the staff report prepared for this Tuesday evening's City Council meeting (link). 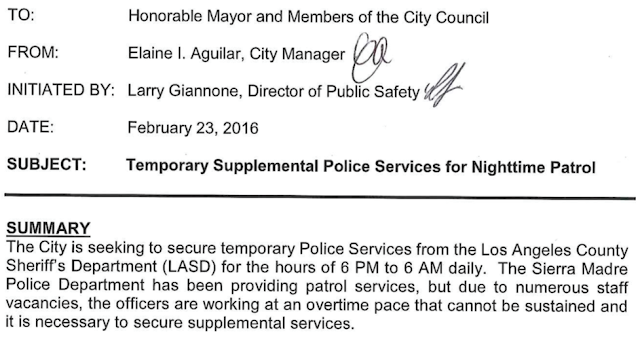 Next is the part where City Hall tells us that the LASD may be required for an entire year to fill in for all of those departed Sierra Madre Police Department personnel. A moment of candor that may indicate just how difficult the city believes it is going to be to get new police officers to work here.

The elephant in the room

Here is the elephant we promised to bring out into the open so that you may examine the big guy in his less than shining glory.

As we saw above, the Staff Report shows a LASD contract cost of $98k a month through July, and $101k a month for the rest of the year. This is to be funded out of reserves for the first four months. After that nobody has determined how any of this is to be paid for, though I imagine they'll find a way. And this would be after the fate of Measure UUT has been determined. Another germane consideration I suspect has been factored into this equation downtown.

However, were the City of Sierra Madre to hire the Los Angeles Sheriff's Department full-time, the cost for one year would be $3,092,402, exclusive of liability insurance costs of $170k (page 55 of the Sheriff's proposal). That is with them taking over the operation entirely. That cost would be approximately $800,000 less than what we're now required to cough up to maintain the costly Sierra Madre Police Department.

Of course, then we would obviously not have to pay that additional $1.2 million for LASD night patrols.

I expected this staff report to reflect some savings due to the fact that we don't have those deserting Sierra Madre Police Officers to pay for anymore since they all quit. Sadly, it does not show any such savings, so perhaps they want to keep that extra cash for other things. While at the end of the day I expect the cost of this two police forces fiasco could be less than $1.2 million, as of now nobody seems to know.

One problem is the City Council and staff are simply engaging in crisis management. The budget and police services are being handled on the fly. Just like they were when Mayor Capoccia went to Arcadia to ask them to help bail the city out.

As it looks now, City Hall appears to be willing to spend as much as an additional $1.2 million dollars, money up and above the nearly $3.9 million already budgeted for the Sierra Madre PD, to buy Chief Giannone a year to hopefully rebuild his now half-staffed police department. That is both the cost and consequences you the taxpayer is being asked to foot for what is now becoming a financial disaster for this community.

This would be done with no real guarantee that Chief Giannone will be able to pull it off, either. Even City Hall's staff report admits how difficult it is to get anyone to work for the SMPD.

So ask yourself this. Is the SMPD worth that additional $1.2 million, just to buy the Chief a little time? Wouldn't it be wiser to hire the Sheriff's Department today and save all of that money? Something that would also save an additional $800,000 a year?

Which, if you think about it, now puts the total potential cost relief at $2 million dollars.

Is this really a good reason to drive the City of Sierra Madre $1.2 million dollars further towards insolvency? Just to appease some dotty sweethearts in town who cannot imagine having to live without blue uniformed public safety personnel? And would be quite upset at the sight of tan and green clad law enforcement employees?

Just how badly do Mayor Capoccia and those other two dudes on the City Council want to keep the SMPD? Is $1.2 million dollars a price the taxpayers should have to pay to temporarily please what for them is a privileged political constituency?

Say hello to the elephant.