Mod: We're in a "tale of two cities" situation with Arcadia right now, but with only the most subtle of differences. In Sierra Madre we can see the influence of big outside money and Pasadena campaign management being brought to bear against a City Council write-in candidate. Ferocious overkill I am sure, but did a bigoted Yes On Measure UUT proponent really have to attack Barry Gold over his religion? A new level of ugliness has now been attained in the Foothill Village ... In Arcadia the troubled candidacy of big development messenger boy "Bulldozer" Bob Harbicht has just received an incredible $26,850.00 campaign contribution from, you got it, a developer. Cash committed in order defeat an insurgent opponent who has had the actual temerity to stand up for resident rights and against invasive mansionization. Terry Miller has put together quite a story for us today.

As Election Draws Closer; Lines in Sand are Drawn
By Terry Miller
As is always the case during an election, some objectionable mudslinging and misinformation finds its way to the public's attention, especially via social media and through the good ol’ U.S. Mail.

Recently the Chinese language social media venue ‘WeChat’ has targeted candidate April Verlato. The anonymous posters’ attempts to discredit the candidate by claiming she was a ‘bully’ were later quelled when another comment caused fear of a possible libel lawsuit. Meanwhile Verlato said she has no plans to file a lawsuit, but needless to say was disturbed by some of the allegations being made.

An out-of-town group known as the California Homeowners Association, out of Willows, California, is encouraging people to vote for Bob Harbicht, saying he will bring “Government Transparency.”

Arcadia Councilman Thomas Beck said: “I am disturbed by the attacks that have been leveled on at least two candidates for Arcadia City Council. In my memory this has not been done in the past, and it is not the ‘Arcadia Way’ of doing things.

“When I learned that Bob Harbicht was being attacked [referring to a previous incident] I spoke to the person I thought was behind it and to his credit I have not seen any more attacks on Bob.

“Now I am seeing outright libelous statements being made against April Verlato. I have tried to get it stopped but have been unsuccessful. This all makes me very sad. We Arcadians are better than this type of campaigning. I understand having differences of opinion but attacking and name calling of a candidate has no place in Arcadia.”

We discovered that Harbicht’s campaign has been helped significantly by one “California Home Owners Association,” allegedly out of Willow, California, but the money trail leads to Nevis LLC, the developer who wants a major hillside development in Arcadia.

We checked with the Secretary of State, and the supporting documentation shows that the California Homeowner’s Association is a PAC – “political action committee”- out of Sacramento. It recently received $26,850 from Nevis Capital, LLC. The direct beneficiary of this is Bob Harbicht.

Nevis Capital, LLC is owned by Ta Jen Lee, aka, Jeff Lee. He is both a Pasadena resident and a developer in Arcadia.

Ta Jen Lee owns the hill above the Highlands, something that he has been trying to develop for the last 15 years. The residents of the Highlands have been fighting this development as it would result in the excavation of the hillside and removal of 32 healthy oak trees for a single home.

The California Homeowner’s Association acts as a shell organization so that their candidate does not have to report contributors on his campaign finance disclosure statements.

California Homeowner’s Association disclosure statements show that $15,000 were spent on mailers for Bob Harbicht, and another $10,000 was spent for online advertising for him as well. 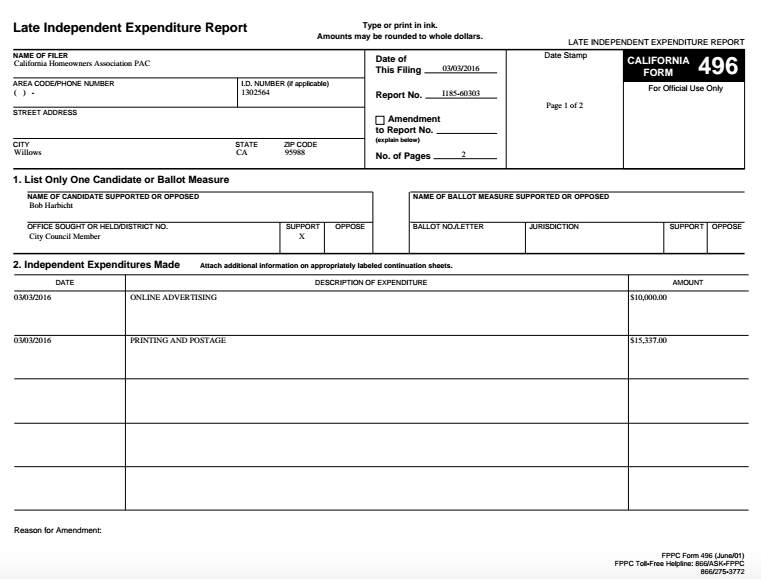 Arcadia Weekly contacted Jeff Lee of Nevis Capital LLC. Lee confirmed that he did contribute a large sum of money to a PAC but said he “donates to a lot of PAC’s and is never sure where the money goes…” We asked him if he supported Bob Harbicht. Lee emphatically said, “Do I support him? Absolutely… Will I vote for him? Absolutely!” But he denies being directly tied to Harbicht’s latest mailer. “ This is how PAC’s work,” he said.

Lee also made reference to the denial of a project of his on Canyon. Lee says the denial of a single home on his 100 acre hillside property there is leading his company into exploring “pre- litigation against the City of Arcadia.”

Candidate Verlato said "I cannot compete with the kind of money that can be raised by developers for Bob Harbicht. Nor would I accept money from developers. Anyone who believes that Bob Harbicht will be ‘fair and impartial’ when a project by Nevis Capital/Jeff Lee is before the City Council is fooling themselves. Do you really think that Jeff Lee is going to take a chance and contribute $26,850 to a candidate that will vote in the best interests of the residents even if it means denying Jeff Lee his project? Developers don’t care about our Community. They only care about their return on investment.”

Mod: So what is it that connects Arcadia and Sierra Madre in this election? Development. The mansionization crowd does not want Barry Gold or April Verlato on any City Council. At least in Arcadia they're being upfront about it. To read Terry Miller's article in its entirety (and there is a lot more) click here. 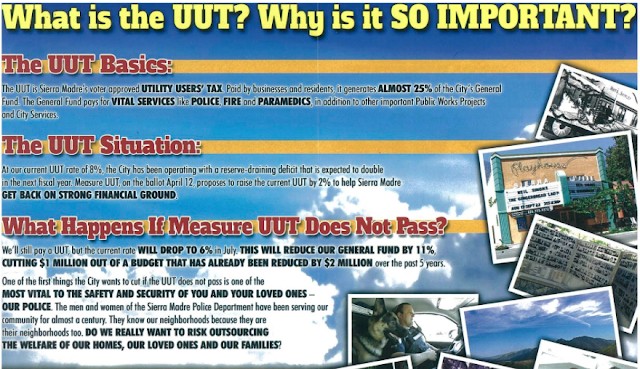 So answer this for me if you can. How can a Police Department that lamely stood by while half its officers deserted to other cities, and now cannot find the manpower to actually protect this community without the overnight assistance of the Los Angeles Sheriff's Department, actually claim things like "They know our neighborhoods because they are their neighborhoods, too?"

No, they're not their neighborhoods. Half of them quit and left Sierra Madre vulnerable to all kinds of criminal activity. They apparently cared little about any of that, and chances are they never did.

Just one more transparently ridiculous and deceptive postcard from the Yes on Measure UUT gang. You can only wonder how much money they have for this nonsense.