Mod: What follows is the latest news from the Barry Gold write-in campaign for City Council.

CITY WEB SITE
In last night's update I told you that on the Election Information page of the city's web site I am not listed as a candidate for city council.  Only Mayor Capoccia and Council Member Harabedian are listed.

I wrote to our city manager, Elaine Aguilar, and she told me that the city only puts, on the city web site, the names of the candidates who are listed on the Sample Ballot. Here is the exchange of e-mails Elaine and I had.

Monday, March 28, 2016 8:32 AM
Subject: City Web Site "Candidate Page"
Good morning Elaine,
I see on the City Web Site, the page titled Candidates, that Mayor Capoccia and Council Member Harabedian are listed as candidates for city council.
I am also a qualified candidate.  Maybe because I am a write-in candidate I am not allowed to be listed on the city Web Site.  Is that the case?
Respectfully,
Barry Gold

Tue, Mar 29, 2016 3:11 pm
Subject: RE: City Web Site "Candidate Page"
Hello Barry –
You are correct.  The City’s website only lists the names, and measures that appear in the official Sample Ballot.
I apologize that I have been so busy the past 24 hours, but I do appreciate your patience.
Sincerely,
Elaine

Tuesday, March 29, 2016 3:29 PM
Subject: Re: City Web Site "Candidate Page"
Thank you Elaine for getting back to me.
Since there has not been a write-in candidate in some 25 years I guess this has not come up recently.
I do respectfully request that my name be added the list of city council candidates on the city web site.  I am a qualified write-in candidate and I feel it is proper to include my name with the words "Write-In Candidate".
I thank you for your consideration of my request.
Barry Gold

Wed, Mar 30, 2016 3:21 pm
Subject: RE: City Web Site "Candidate Page"
Hello Barry-
I understand what you have expressed in your email.  I am sincere when saying that pursuant to your request I have taken another look at this situation.  However, the official Sample Ballot information is what has appeared on the city’s website with respect to candidates and measures.  You were correct; because your name is not listed in the official Sample Ballot, it is not listed on the City’s website.
Sincerely,
Elaine

Wednesday, March 30, 2016 4:41 PM
Subject: Re: City Web Site "Candidate Page"
Hi Elaine,
Concerning the election information on the city's web site, specifically the listing of the candidate's names, I understand that the city has always just listed the names of the candidates that are on the Sample Ballot.  I do not think there has ever been a qualified "Write-In" candidate since the city created the web site.
In the city's "NOTICE OF NOMINEES FOR PUBLIC OFFICE", copy attached, the city listed me as a Write-In candidate.  Why would I be put on the Notice and not on the web site.
I again ask you to put my name on the web site.  It is not fair to say that because no one before, who was not on the Sample Ballot, has been put on the web site, because this has never happened before.
Please reconsider the decision to leave my name off of the city web site as a Write-In candidate for city council.
If this is against some law or rule please let me know.  I would not ask the city to do something that is against the law.
Respectfully,
Barry Gold

Wed, Mar 30, 2016 4:52 pm
Subject: RE: City Web Site "Candidate Page"
Hello Barry,
The “Notice of Nominees” is not the same as the Sample Ballot.  I understand your instance in this matter, but I cannot deviate from past practice as far as the City’s website is concerned.
Thank you,
Elaine

I am a candidate.  If you write my name on the ballot it will be counted.  If I get more votes than one of the other two candidates I will be elected.  But on the city web site I do not exist.

During this campaign I have been telling people that among the first things I will do if elected is support contracting with the sheriff, cut more costs, and start to improve our infrastructure.  Now I will have to add to the list changing this ridiculous policy of our city refusing to acknowledge the existence of a qualified candidate.

It is not because I am the candidate that is suffering from this awful policy.  It is because this policy is just WRONG.

Mod: The following e-mail was sent by a Sierra Madre resident to all of the addressed officials listed below. If and when a reply comes through we will post that as well. 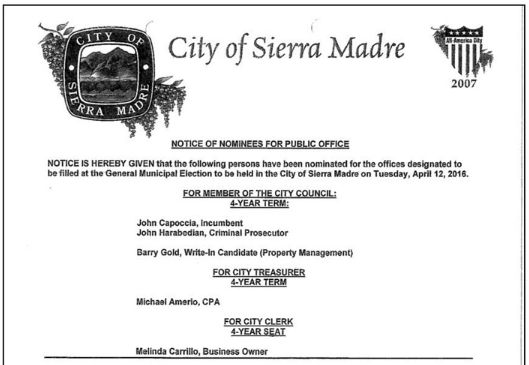 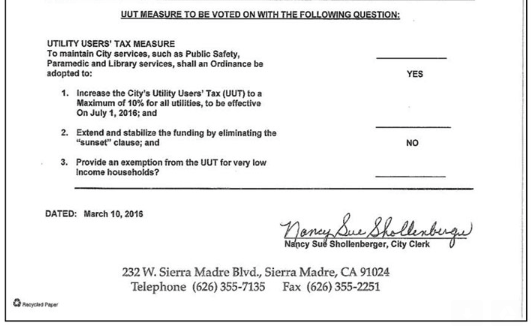