Pension Tracker is this useful tool that allows adventurous citizens to explore and confirm just how deeply sunk in CalPERS pension debt their local government agency is at this golden moment in time. It also gives folks the opportunity to see where exactly things are going as well.

PT is run by a Dr. Joe Nation, Project Director for the Stanford Institute for Economic Policy Research. As in Stanford University, just in case you had any doubts, or perhaps thought this was some sort of a conspiracy. The revelations to be found there regarding the financial peril many California cities face is pretty sobering. Not that everyone will understand it, of course. Certainly a lot of Sierra Madre's Yes On Measure UUT "Facebook Friends" won't have the foggiest notion of what this is all about. After all, it doesn't address that most important of topics for these folks, which is themselves. But I have faith in the abilities of people like you.

Here is what was reported a few days ago about unfunded CalPERS debt in Sierra Madre (link here).

There are a lot of interesting and very large numbers there, including that $9,665,477 in "unfunded actuarial liability." What this means is the solons who run the city's affairs have committed to more than $9 and one half million dollars in CalPERS pension debt that they cannot otherwise pay for without first raising utility taxes here a full 66%. Out of an incredible total amount of $36,907,048. And, under California state law, the only way they can do this is to get you to vote for Measure UUT.

According to Pension Tracker, every individual household in Sierra Madre owes $6,754.00 dollars in "unfunded market liability" CalPERS debt. That is what each family living in Sierra Madre is on the hook for right now. And it will go up even more as CalPERS fund investments continue to underperform. Measure UUT is how City Hall plans to collect on that family by family debt to pay for its immense CalPERS liabilities.

Of course, even then that 66% increased take will not be enough to fix much of anything, either. That will come in 2018 with either a parcel tax or newly hiked property taxes. But don't worry, you will get to vote on that one as well.

However, and as bad as all that is, Arcadia is even worse off. Much worse, actually. Here are the numbers (link): 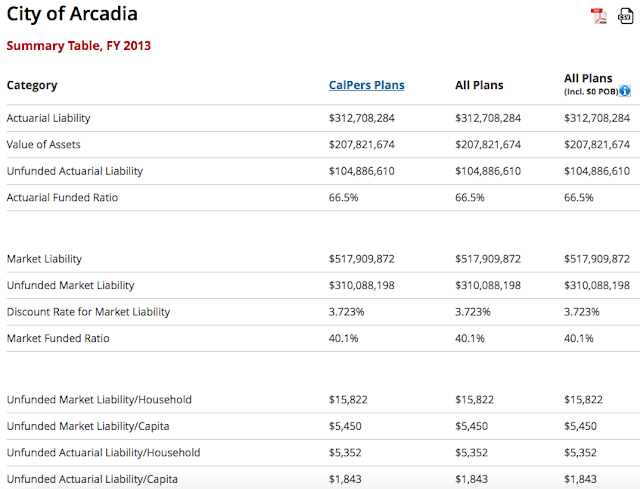 Right now the City Of Arcadia is shelling out upwards of $14 million yearly in pension cash to its rather poshly compensated employees just to keep up with its current obligations. However, even then this already massive debt keeps increasing, with the breaking point perhaps just a few short years away.

And when did this all come to be? While Bob Harbicht was on the Arcadia City Council and gave away the farm to every city employee and municipal employee union in town. Done in exchange for the political support that has kept him in power off and on for the last three decades.

Why would anyone want to bring this guy back? It's a mystery to me.