Most people in town would tell you that the reason they are going to vote "Yes" on Measure UUT is because they want to save the Library, or what remains of the Sierra Madre Police Department, or the Paramedics, Water Department, that sort of thing.

And you really cannot blame them too much. After all, isn't that what they are being told by the elected officials they've entrusted to run their city's affairs? Backed up by a $30,000 largely city employee union funded postcard campaign run by a Pasadena political consultant? With cash also kicked in by those very same elected officials?

So why should residents not believe what these people are telling them? It's not like they would deliberately fudge any facts in order to get more money out of the taxpayers, right? Then again, maybe they would. Because it certainly doesn't look like they are telling the truth.

Unfortunately, Measure UUT isn't going to pay for much of anything quite that useful. It isn't going to fix the pipes, repair the sidewalks, trim the trees or maintain any parks. Mostly it is going to be used to pay for employee salaries, benefits and, for the largest part, Sierra Madre's potentially crippling CalPERS municipal employee pension debt.

There is this very interesting website called Pension Tracker (link). It is run by a Dr. Joe Nation, who is the Project Director for the Stanford Institute for Economic Policy Research. As in Stanford University in case you had any doubts, or feared some sort of conspiracy. Here is a screenshot from the site that displays just how immense California's government employee pension debt problem has become.

This $946.4 billion dollars in unfunded statewide liabilities is unequally divided among hundreds of California cities, Sierra Madre included. Here are the numbers for the town we're discussing today (link). 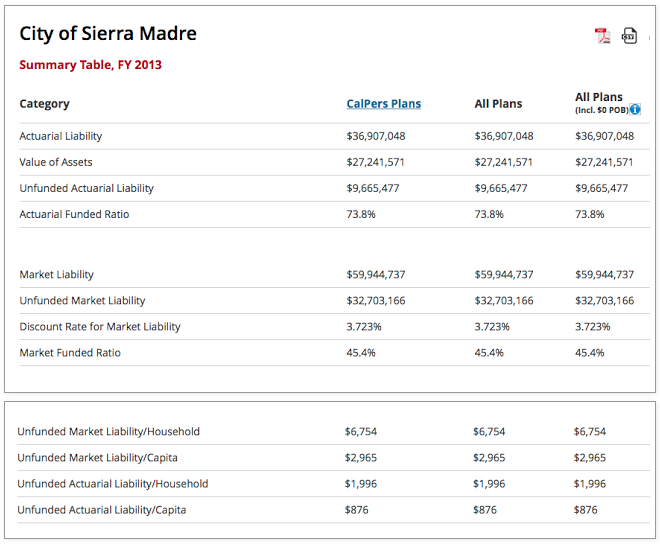 There are a lot of interesting and very large numbers there, including that $9,665,477 in "unfunded actuarial liability." What this means is the solons who run the city's affairs have committed to more than $9 and one half million dollars in CalPERS pension debt that they cannot otherwise pay for without first raising utility taxes here a full 66%. Out of an incredible total amount of $36,907,048. And, under California state law, the only way they can do this is to get you to vote for Measure UUT.

However, the political problem for these folks is that should the city share the real reason driving their need to get Measure UUT passed, paying for vast amounts of stupidly acquired pension debt the city cannot otherwise cover, they fear you will not vote for it. So instead City Hall, along with the mercenary-run and veracity free crew at the "Yes On UUT" campaign, have chosen to tell you that instead it is to "Save the Library," the Paramedics, etc.

None of which is actually true. Though yes, City Hall probably would fold the Library into the county system before reneging on their CalPERS obligations.

According to Pension Tracker, every individual household in Sierra Madre owes $6,754.00 dollars in "unfunded market liability" CalPERS debt. That is what each family living in Sierra Madre is on the hook for right now. And it will go up even more as CalPERS fund investments continue to underperform. Measure UUT is how City Hall plans to collect on that family by family debt to pay for its immense CalPERS liabilities.

And why would the city want to do this? Partly because it is their own pensions that are at stake. How will they be able to retire if they don't? Or if the City of Sierra Madre slips into insolvency because it cannot pay this debt? Which, right now, it cannot. They're almost $10 million dollars in the hole.

Unfortunately, there are a lot of misinformed and naive people out there who probably never will be able to wrap their heads around any of this. Or, as P.T. Barnum famously put it, "There's a sucker born every minute."

In Sierra Madre you can tell who they are by the purple signs in their yards.