Mod: The following e-mail received some fairly large circulation over the last week. I thought I should share it here because threatening newly elected City Clerk Melinda Carrillo with the loss of her pay, as incredibly meagre as it is, was exceptionally rude and uncalled for. Hopefully the City Council will at least consider an apology. As a beginning act it certainly did not reflect well on Mayor Goss's very first night on the job.

I sincerely hope that the first item on your agenda next Tuesday will be a profound apology to our City Clerk for browbeating her the way you did at her very first council meeting. She did not deserve to be put on the spot the way she was. She signed up to earn one rate of pay, and within the first hour you are telling her that you may decrease this, or she can quit if she wants to. Yikes!

Secondly what was that all about, asking her if she wouldn't have run for the position if someone else had?  In 32 years, Nancy Shollenberger only had one person run against her.  We are lucky Melinda stepped up to take the position. Do you not realize that we are getting a bargain with our elected City Clerk? If staff takes the minutes, then the city will have to pay benefits and CALPERS. We hear continuously how overworked the staff is. Now it would appear that the Library Director and Community Services positions will be combined. This is not the time to nickel and dime a valuable resident out of a service to the community.

Clearing up the pension debt inaccuracy in a staff report

Mod: The following is found on agenda item #5 and is titled "WATER SYSTEM FINANCING OPTIONS AND MONTHLY UTILITY BILLING. It is somewhat misleading. You can find this in the original by clicking here.

That $6.75 million number is a portion of the 2003 Water Bond debt. The actual financial obligation is actually more than double that because to date the city has made interest only payments on that principal. For whatever unkind purpose the author of this agenda report chose to leave a lot of that ridiculous amount of interest exposure out of her report.

When MaryAnn Macgillivray was Mayor she dragooned the City Manager into releasing the actual 2003 water bond debt figures to the public. To my recollection that was the only time this has ever been done. Here are the actual figures. 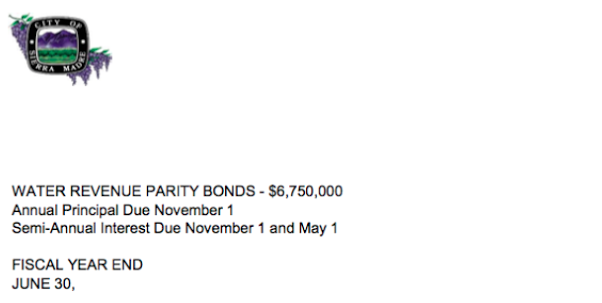 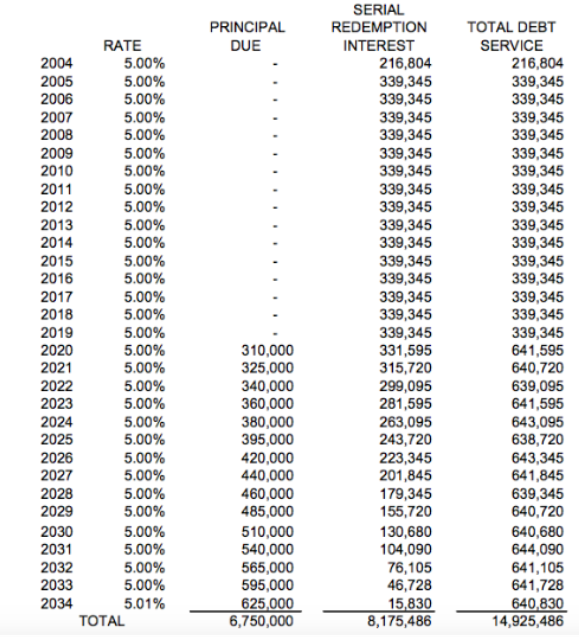 Sierra Madre's 2003 "Bart Doyle" water bonds were originally $6,750,000. For whatever reason the city decided to make interest only payments on those bonds through the year 2019, while also extending payments all the way out through the year 2034. The entire cost once all is said and done being $14,925,486.00, or substantially more than double the principal.

Why this ruinous debt load was ever incurred has been the source of much speculation over the years. Many are of the opinion that it has a lot to do with the so-called "Downtown Specific Plan," a hare-brained redevelopment scheme that would have seen much of Sierra Madre's picturesque downtown razed and replaced with the kind of generic crap found in way too many California cities today.

Fortunately Measure V put an end to all of that. However, the 2003 Water Bonds had already been issued. We're still paying for this incredibly bad financial blunder today. And yes, precious few pipes were repaired in that process.

Tonight the City Council will begin considering floating an additional bond (misidentified in the staff report as a "loan") in order to raise the $13 million big ones necessary to rescue the water department and its badly neglected infrastructure. It is important that the residents completely understand just how much additional debt this will involve, and just how large a debt load the city will have then taken on.

Fudging the figures in this manner is not an exactly noble gesture.

Anybody know what is going on with this?

The Hildreth trial has been going on for more than a month now. An extremely long time in my opinion. Any information would be appreciated.