Join the Campaign to Repeal the Car Tax

Mod: Here is an interesting gadfly campaign. Apparently the cash mad pols of Sacramento passed some rather huge car and gas tax increases recently, and folks are none too happy about it. I was asked to pass this on, so here you go. I am not certain your signature on this petition will mean anything since it is for a recall election down there in the pulpy citric bowels of Orange County. But perhaps you know someone from that neck of the woods who would like to become involved? It is definitely the kind of local initiative that could end up having some rather interesting statewide ramifications. As an aside, if you don't live in the OC, but don't want to pay all those new gas taxes anyway, get an electric car. My Chevy Volt is now averaging just around 130 MPG life to date. I have spent $5 at the gas pump this month. Irony is, Sacramento gave me a $1,500 tax rebate so that I could avoid paying gas taxes. The Feds gave me a $7,500 tax credit. How can you lose?

Join the Campaign to Repeal the Car Tax (link): With virtually no notice to the public, Democratic politicians in the California State Legislature crammed through a massive hike to the Car Tax and Gas Tax.

Fortunately, former San Diego City Councilman Carl DeMaio has unveiled a strategy for getting citizens involved in overturning these tax hikes! More on that in a bit, but first you need to understand how these tax hikes will cost YOU!

Depending on the value of your car, miles driven, and your MPG, the typical California family will end up paying $350-700 more per year under the Car Tax and Gas Tax hike!

What’s worse, the money is spent with virtually zero accountability for fixing roads! In fact, Californians already pay the highest gas tax in the country and yet we still have the worst roads. For every $1 in average costs for road repairs spent in the other 49 states in the US, California spends $4.7 dollars for the same repairs – resulting in wasteful spending of 470 percent more!

The Gazelle Strategy to Repeal the Car Tax: Recalls!

California Democrats were able to pass the Car Tax and Gas Tax Hike because they hold a 2/3rds Super-Majority in both houses of the state legislature. We have two choices: run an initiative to roll back the Car Tax – which must be done statewide. OR we can fix the real problem which is removing the Democrats from their Super-Majority status by targeting their weakest members for Recall campaigns in 2017 or defeat in 2018.

Think of this strategy as the “Gazelle Strategy.” If you have seen Animal Planet, you know that lions hunt for food not by attacking an entire pack of Gazelles at once, but targeting the weakest gazelle and taking that one gazelle out. Far more efficient and an almost guaranteed success rate.

Our campaign to repeal the Car Tax utilizes the Gazelle Strategy. That’s why we propose to launch a Recall Campaign against State Senator Josh Newman (D-Orange County).

Senator Josh Newman won by less than 1% of the vote in 2016 – and yet he betrayed his constituents by voting for the Car Tax and Gas Tax hikes.

Our campaign intends to file Recall Papers in the next month against Senator Newman and collect 60,000 valid signatures to force him from office.

After we succeed in recalling Josh Newman, Democrats will lose their Super Majority and will not be able to arbitrarily raise our taxes.

Then we will demand that California Democrats repeal the Car and Gas Tax Hikes – or we will file additional Recall Elections against more of their members. We will also use the Car Tax as the big issue to defeat their candidates in 2018.

We need YOU to join our campaign today – help repeal the Car Tax!

Mod: Here is what the petition looks like. You can link to it directly by clicking here. 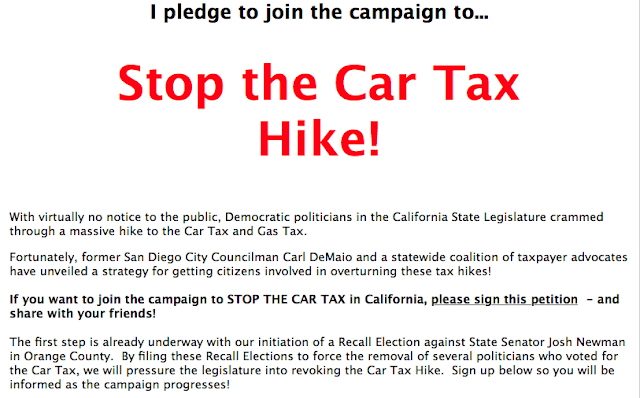 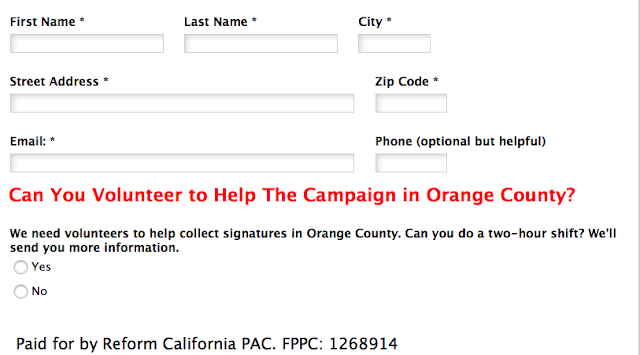