For a while there I thought City Hall was dealing with the obviously illegal Henry A. Darling demolition like it was a serious issue. I was wrong, of course. Blame it on my too abundant capacity to believe. This has led me down unhappy roads before, and obviously I have fallen for it all over again. Very sad to say.

We all know the Henry A. Darling house story by now, and the last thing I feel like doing on this cool and breezy evening is regurgitating that sad tale of arrogance and stupidity all over again. As we know, life is far too short for that.

But there are two portions of the Staff Report for this item that literally defy all logic. If these people are the guardians of this city's interests, along with the defenders of its laws and construction codes, then you might as well head on down to City Hall and take whatever you want. Apparently staff will just stand by, grinning happily as you remove office equipment and anything else of value and beat feet to the nearest pawn shop.

Which, if I am not mistaken, is somewhere due east of here. Possibly in Pomona.

Here is that portion of the agenda report (link) where staff calls upon the Planning Commission to give Billy Kefalas and his lawsuit happy lawyer every little thing their hearts desire. 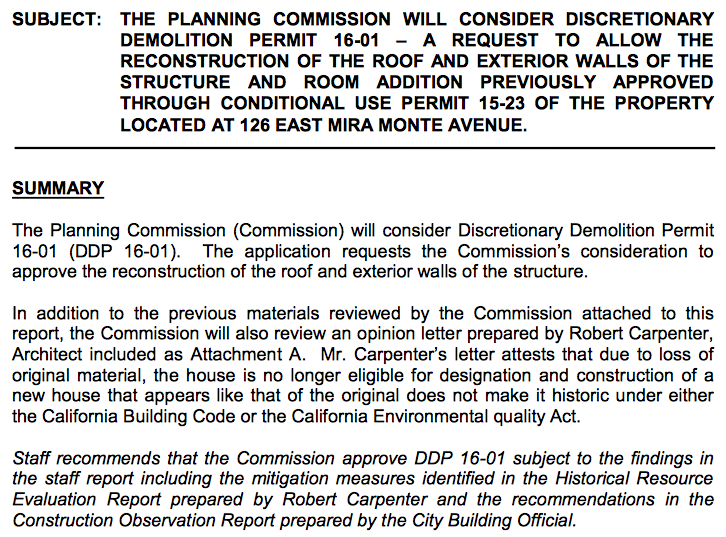 Did you get that? It is repeated later as well.

In this new Robert Carpenter "Historical Resource Evaluation Report," commissioned by Mr Kefalas because the original one did not reach a conclusion that served his personal interests, the following astonishing conclusion is drawn.

There it is. The Henry A. Darling house no longer has any historical validity because the things that would have given it that designation were destroyed. Therefore the Planning Commission should give the guy who brought about that very destruction a Discretionary Demolition Permit. Something Kefalas needs so he can continue doing with that property as he sees fit.

That is what City Staff has based their decision on. The Henry A. Darling house no longer has any historical value because that part of it was destroyed. Therefore let's give the guy who did the deed what he needs to reap the rewards his unhappy actions will bring him.

Bad, even for city government. Your tax dollars at work.