Mod: I ordinarily don't like to post articles having titles quite that long, but this really is a special case. Yesterday things went quite bananas in Peacocktown, and we're here to try and untangle this latter day Valentine's Day Masasacre for you.

As you might know, the now oxymoronically titled "Arcadia's Best" website is currently owned and run by Arcadia Mayor Pro Tem Sho Tay. Here is a document that establishes his ownership. It is important to share this because Sho Tay is now apparently claiming he bears no responsibility for what gets posted on his own website. Here he identifies himself as both owner and "webmaster." 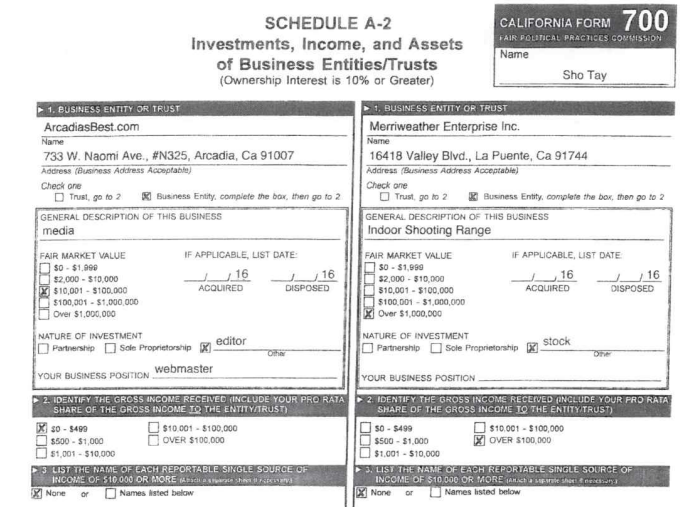 Arcadia's Best used to be the pride and joy of a fellow named Scott Hettrick. Scott ran it as a kind of Chamber of Commerce news site, and filled it with articles that promoted local businesses and civic events. You know, nice community booster style positive stuff.

However, Scott moved to Nebraska a couple of years back to be with his grandkids, gave up the blog business and, quite obviously, things have now gone downhill very quickly at a site many refer to today as "Arcadia's Worst."

Yesterday someone posted a truly nasty and dishonest hit piece on the Arcadia's Worst site smearing current City Councilman Tom Beck. And this person did it under the name of Scott Hettrick who, after being contacted by incredulous Arcadia residents at his home in far away Omaha, swore he had nothing to do with it. And why would he? He gave the site to Sho Tay two years ago and hasn't been involved with it ever since. Plus it just isn't his style. Scott is a far better writer than that, and never penned anything I've ever seen in such an "ESL" style.

Sho Tay was then contacted by certain aggrieved residents and asked why he had written such a thing and posted it on a site many still believe has something to do with civic involvement and promoting the nice things about Arcadia. Sho then claimed it wasn't him, but rather it was posted by hackers and he would take care of it right away.

So what was Sho Tay's idea of taking care of this situation? Did he take down the offending article and apologize to Scott Hettrick? Or explain to a baffled community that the article was put there by a hacker, and that he has hired professionals to improve the security on a site that he himself owns?

No, instead he left the article up, said Scott didn't write it, and then gave it a new author. 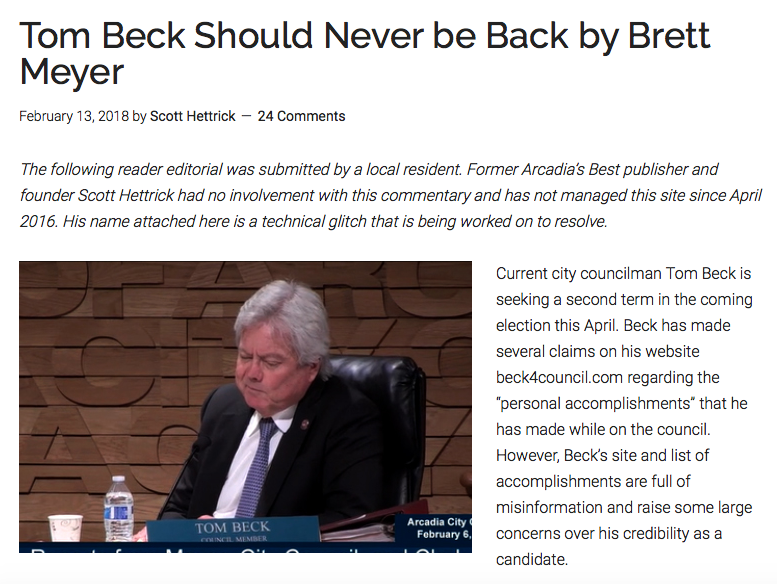 Very strange, right? Technical glitch indeed. The smear piece is still attached to the name Scott Hettrick, but the site's owner said it was actually posted by a mystery resident. Look, if your website was hacked and an obvious smear piece was left there, and under the name of a highly respected fellow who ran the local Chamber of Commerce for years no less, you'd immediately pull it down, right? Then call the cops. Obviously Sho's weird solution here does raise some very substantial questions.

Tom Beck responded to the smear by posting the following on Arcadia's Worst.

WHO WROTE THIS FALSE HIT PIECE? Everything on my website can be backed up with documents or emails. The two lawyers on the CC voted to fight the potential lawsuit because of facts of Arcadia were unique and we thought we could win. EVERY ARCADIAN I HAVE TALKED TO THINKS DISTRICTS ARE BAD FOR ARCADIA. At large election would mean everyone who wants to be on the CC would have to face the voters they represent- including Sho Tay. My votes prove I’m the MOST FISCALLY CONSERVATIVE member of the CC. The Brinks sent me an email stating they totally support me and were telling their friends to vote for me. They were then listed as endorsers. I then received a later email that they should be removed because Burt is running for the Assembly but they still support me and were sorry. Sho Tay is WRONG!! I did bring the Ring Door Bell Program. Sho should ask our City Manager where I first brought it and it was passed to Police Chief.

There is one more piece to this very strange puzzle. Sho Tay is now claiming that the smear was posted (or hacked in) by someone who goes by the name of Brett Meyer. No such name can be found on any list of property owners in town, nor has he been located yet on any roster of Arcadia voters. And I emphasize the word "yet" because we are still trying to identify who Brett Meyer might actually be. Nobody knows who this man of mystery is.

My opinion? What follows is conjecture at this point, but it is where all of the evidence is now pointing. Sho Tay, or someone close to him, wrote the piece, and he posted it under the name of Scott Hettrick because he thought this would lend it some credibility. Obviously Sho felt it did need a credibility boost, and for once he is right. And if true, it was obviously a very creeped out thing for him to do.

After Hettrick was contacted in Omaha about the smear piece and cried foul, Sho Tay then claimed the site had been hacked, but strangely enough left the offending piece up anyway just in case someone in town did write it. Or so he claims. Sho also left Hettrick's name there for all to see, along a very odd explanation for having done so.

Now Sho Tay is claiming an as yet unidentified "Brett Meyer" wrote the hit piece, but nobody knows who this guy is. Nor has evidence of his existence been found so far in any of the usual places.

You do realize that Sho Tay is about to become the next Mayor of Arcadia, right? I pity the peacocks.