This Attractive Billboard Is Going Up All Across America 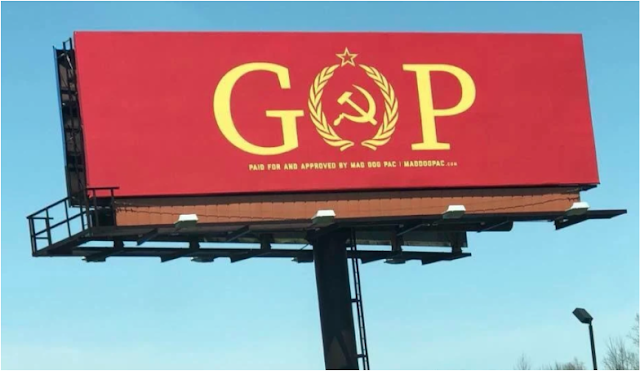 They're created and paid for by something called the Mad Dog Pac. Apparently a lot of money is donated to the MDP by concerned citizens like you and I, and they turn that cash into eye catching informational billboards.

The one above was photographed in Indiana. It looks like this may be coming to Los Angeles as well. I hope they put one up on Green Street in Pasadena. It would be appropriate.

Here is the Mad Dog map of where these puppies are slated to grace America's busy interstates. Be sure to keep an eye out for them.

The evidence included texts and emails from Russian military officers and information gleaned from a top-secret source close to Mr. Putin, who had described to the C.I.A. how the Kremlin decided to execute its campaign of hacking and disinformation.

Mr. Trump sounded grudgingly convinced, according to several people who attended the intelligence briefing. But ever since, Mr. Trump has tried to cloud the very clear findings that he received on Jan. 6, 2017, which his own intelligence leaders have unanimously endorsed.

The shifting narrative underscores the degree to which Mr. Trump regularly picks and chooses intelligence to suit his political purposes. That has never been more clear than this week.

On Monday, standing next to the Russian president in Helsinki, Finland, Mr. Trump said he accepted Mr. Putin’s denial of Russian election intrusions. By Tuesday, faced with a bipartisan political outcry, Mr. Trump sought to walk back his words and sided with his intelligence agencies.

On Wednesday, when a reporter asked, “Is Russia still targeting the U.S.?” Mr. Trump shot back, “No” — directly contradicting statements made only days earlier by his director of national intelligence, Dan Coats, who was sitting a few chairs away in the Cabinet Room. (The White House later said he was responding to a different question.)

Hours later, in a CBS News interview, Mr. Trump seemed to reverse course again. He blamed Mr. Putin personally, but only indirectly, for the election interference by Russia, “because he’s in charge of the country.”

In the run-up to this week’s ducking and weaving, Mr. Trump has done all he can to suggest other possible explanations for the hacks into the American political system. His fear, according to one of his closest aides who spoke on the condition of anonymity, is that any admission of even an unsuccessful Russian attempt to influence the 2016 vote raises questions about the legitimacy of his presidency.

Mod: The rest of this article detailing Trump's continuing coverup of Russian ongoing interference in US domestic politics and elections is available at the link.