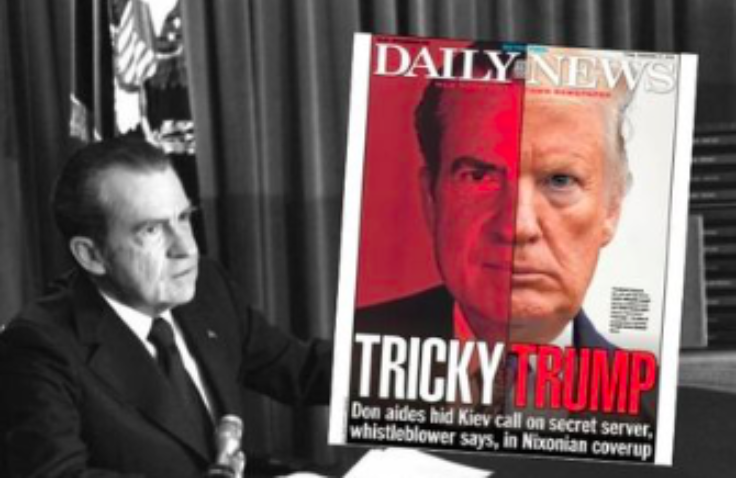 Mod: That's one thing about Trump. He doesn't internalize his rage. Even threats that allude to the execution of "spies" are just fine for the gone wild Orange Narcissus.

Unhinged Trump rips whistleblower as ‘maybe a spy,’ accuses sources of ‘treason’ (New York Daily News link): The impeachment inquiry set President Trump off on a crazed rant in which he essentially accused a whistleblower and his or her sources of being spies and traitors.

“They’re almost a spy,” Trump reportedly said Thursday of the whistleblower, whose complaint prompted Democrats in Congress to announce the impeachment probe earlier this week.

“I want to know who’s the person, who’s the person who gave the whistleblower the information? Because that’s close to a spy,” the president fumed in front of members of the U.S. Mission to the U.N. in New York City, according to the Los Angeles Times.

“You know what we used to do in the old days when we were smart? Right? The spies and treason, we used to handle it a little differently than we do now.”

The tirade continued a pattern of Trump outlandishly — and baselessly — calling perceived opponents “traitors.” He used the term to smear ex-FBI Director James Comey and former FBI Director Andrew McCabe, among others.

This time, the president is targeting a whistleblower who raised alarm over Trump’s efforts to pressure Ukraine’s President Volodymyr Zelensky to investigate ex-veep Joe Biden and his son. The whistleblower’s bombshell report says White House officials sought to cover up a damning July phone call between the leaders by moving its transcript to a different computer server.

Staying true to form, Trump has also been on an almost non-stop Twitter rampage, stating in all caps Thursday morning: “The Democrats are trying to destroy the Republican Party and all that it stands for.”