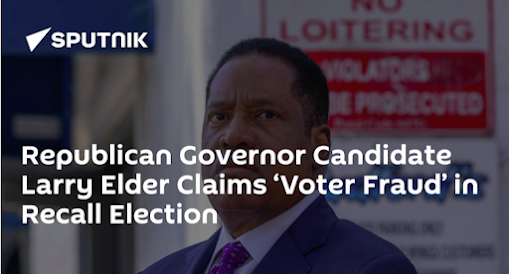 Mod: The big problem is the election hasn't happened yet. Election Day in CA is today.

As Newsom leads California recall polls, Larry Elder pushes baseless fraud claims - A website paid for by Elder's campaign on Monday predicted his defeat and blamed unsubstantiated fraud claims (NBC News link): Republicans in Tuesday's California gubernatorial recall election are already laying the groundwork to argue the election was stolen — even before a single ballot is reported or a victor declared, an increasingly common tactic in conservative circles. 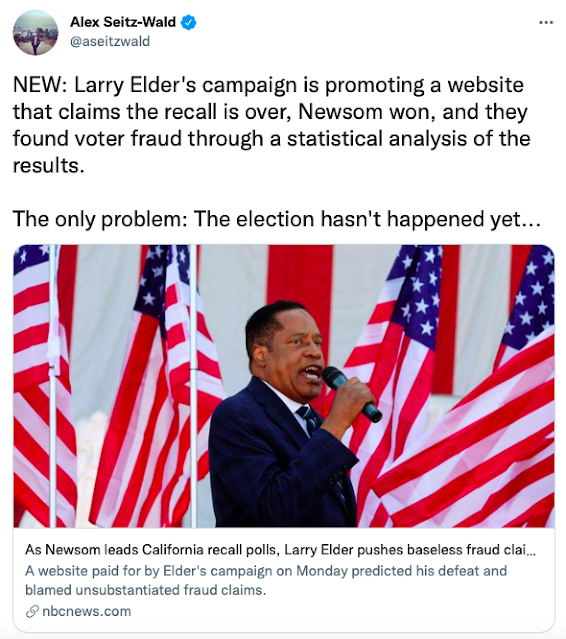 Republican Larry Elder appealed on Monday to his supporters to use an online form to report fraud, which claimed it had "detected fraud" in the "results" of the California recall election "resulting in Governor Gavin Newsom being reinstated as governor."

The only problem: On Monday when the link was live on Elder's campaign site, the election hadn't even happened yet. No results had been released. And Elder was still campaigning to replace Newsom as governor. 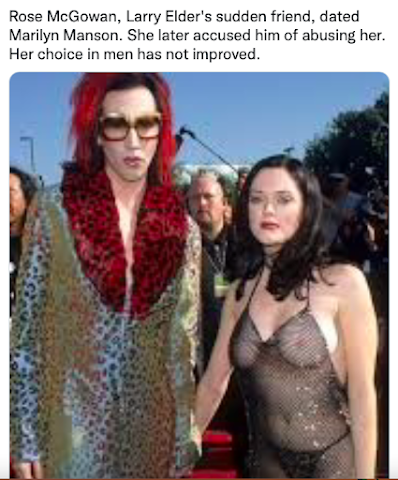 “Statistical analyses used to detect fraud in elections held in 3rd-world nations (such as Russia, Venezuela, and Iran) have detected fraud in California resulting in Governor Gavin Newsom being reinstated as governor,” the site reads. "The primary analytical tool used was Benford’s Law and can be readily reproduced."

The site added on Monday afternoon a disclaimer saying it was "Paid For By Larry Elder Ballot Measure Committee Recall Newsom Committee," with major funding from Elder's gubernatorial campaign. 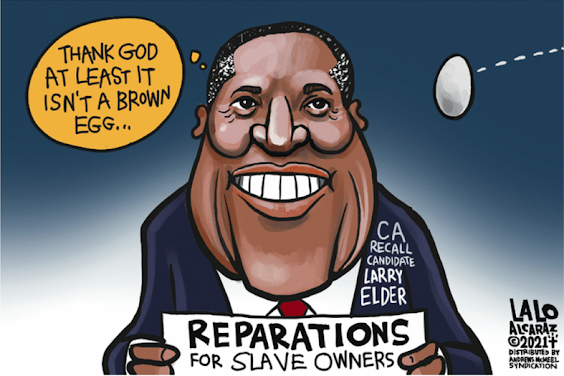 The most recent polls show Newsom is likely to survive the attempt to remove him from office in Tuesday’s recall election. Elder and other Republicans have already started chalking up a potential loss to baseless allegations of voter fraud, following the script written by former President Donald Trump.

“This is really becoming the standard GOP playbook,” said Lee Drutman, a senior fellow at the New America think tank who studies democracy. “This is democracy 101. If you don't have elections that are accepted and decisive, then you don't really have a democracy, because the alternative is violence or authoritarianism.”

Mod: The witless Russian news site Sputnik also jumped the gun (link). Big surprise in that, wot? Rachel Maddow is all over this story.