Mod: Just another presidential moment for Donald? The old fool is still all wet. 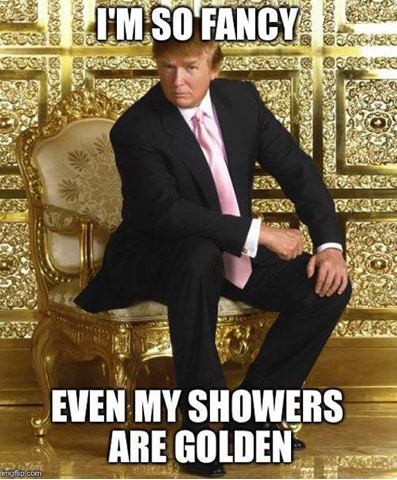 Trump brought up the infamous "pee tape" allegation that was included in a dossier compiled by former British spy Christopher Steele.

According to the dossier, which made several unproven claims about Trump's relationship with Moscow, Trump allegedly hired "a number of prostitutes to perform a 'gold showers' show in front of him" in the presidential suite of the Ritz-Carlton Hotel in Moscow.

Audio of the former president's address to the National Republican Senatorial Committee in Palm Beach reviewed by The Washington Post revealed Trump's denial. "I'm not into golden showers," Trump reportedly said. "You know the great thing, our great first lady--'That one,' she said, 'I don't believe that one.'"

@jdawsey1: At NRSC retreat, Trump continued false claims of fraud, urged GOP to stick together and relitigated much. “I'm not into golden showers," he told the crowd. "You know the great thing, our great first lady--'That one,' she said, 'I don't believe that one.'”

Mod: So which ones did she believe?