Mod: The financially at risk Trump family is now down to peddling some dumb t-shirts.

Don Jr. Releases More Cringeworthy Merchandise, This Time With a New Meaning for ‘LGBTQ’ (Political Flare link): Over the past few weeks, Donald Trump Jr. has been trying to earn some cash selling merchandise that utilizes Republican slogans, ideas or ideals (always grifting, that family). Originally, he was attempting to profit by selling clothing with the “Let’s Go Brandon” slogan that conservatives were using to imply the phrase “F**k Joe Biden.” 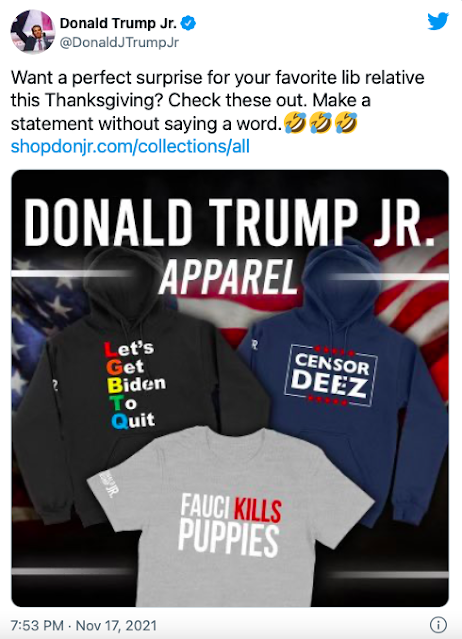 The latest t-shirt has the initials LGBTQ on them, but on Don’s apparel, they spell out “Let’s Get Biden To Quit.”

Why is it that Don Jr. has been suddenly trying to profit off of cheap, offensive merchandise in the past few weeks? One plausible theory has to do with all the money the Trump family is losing, from selling their Washington D.C. hotel to having their events cancelled because the organizers are racially intolerant and borderline violent.

Don Jr. has sent out many tweets, urging Republicans to buy his cheesy clothing line as gifts for their liberal relatives over the holidays. Either Don Jr. is deeply passionate about poor quality graphic tees, or the Trump family is more affected by their profit/loss statement than they let on. 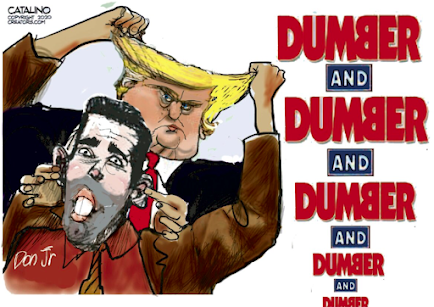 At an upcoming event that Don Jr. had been scheduled to appear at, they were selling exorbitantly priced tickets. They were even trying to sell special tickets that cost an extra $500 for a personal meet and greet with Trump’s son himself. The cancellation of that event is just one more check that the Trump family will not be able to cash in.

Don’s latest Tweet contained a picture of three clothing options, including the “LGBTQ” hoodie and one shirt that sports the phrase “Fauci K*lls Puppies.” The caption that accompanied read: “Want a perfect surprise for your favorite lib relative this Thanksgiving? Check these out. Make a statement without saying a word.”

I know Don Jr’s schtick is all about “owning the libs” at this point. But seriously, this is just sad and pathetic no matter what your collapsed family fortunes.

Posted by The Moderator at 7:00 AM