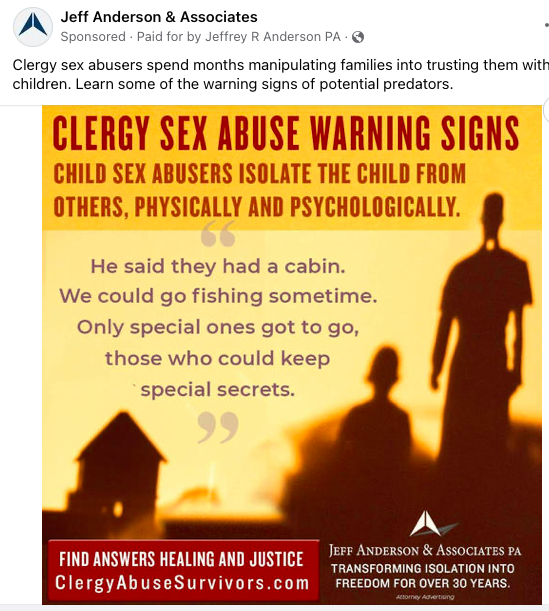 McMansions aren't the only problem Mater Dolorosa faces (Mountain Views News link): The Mater Dolorosa Retreat Center is already the stuff of local controversy. The notion that 42 McMansions might accrue some sort of religious significance from being built on land sold by the Monastery has been a source of much humor. That the Monastery has special development rights beyond those actually paying taxes in town? Less amusing.

You might believe that the conflagration over priestly sexual abuse of children had ended. It is not so. There remain thousands of victims who have yet to surface. In recognition Sacramento signed into law a bill called the California Child Victims Act in 2019. This extended the statute of limitations for these specific crimes by three years. It sunsets this December.

In order to encourage those remaining persons to come forward, a law firm, Jeff Anderson and Associates, has launched an extensive social media outreach campaign. For this the firm has produced a series of short videos identifying offending priests and their associations with Los Angeles area Catholic institutions. Three deal specifically with accused Passionists affiliated with Mater Dolorosa.

Here are brief descriptions of the 3 Passionist videos, plus YouTube URLs you can use to view them. Those doing so will see very familiar Sierra Madre sights.

Accused priest John Baptist Ormechea: Also accused of molesting minors. As of 2017 Fr. Ormechea was thought to be working for the Vatican in Rome. (https://www.youtube.com/watch?v=2m6P-SOpzgM)

The purpose of these videos is not to revisit horrors from the past. Rather it is to encourage those who were so preyed upon to find justice before all opportunities are gone. People now likely well into middle age, and might have decided they need to live with a terrible secret forever.